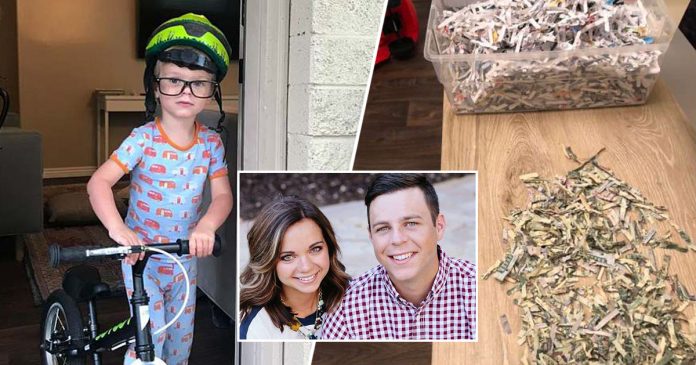 How would you feel when the money you’ve been saving up ended up in a paper shredder? Ben and Jackee Belnap definitely know how that feel because the money they’ve been saving has been destroyed by their son.

The couple had been saving up money to pay Ben’s parents back for season tickets for the University of Utah football team. However, the envelope containing  $1,060 cash that they saved suddenly went missing from their Holladay home over the weekend.

Frantically looking for the misplaced money, Ben and Jackee searched for all the possible places—even in the trash.

“I’m digging through the trash and she hollers and says ‘I found it!’. She’s holding the shredder and says ‘I think the money is in here’,” recalled Ben on the incident.

It turned out that their 2-year-old son Leo had shredded the money in the family’s paper shredder.

“We just, for like five minutes, we just shuffled through it, not talking. We didn’t know what to do and then I broke the silence and I’m like, ‘Well, this will make a great wedding story one day’,” said Jackee trying to to get herself together after she saw the money in that form.

Leo often helps Jackee to shred junk mails and confidential documents the family wants to get rid of, so he is just too familiar with the shredder.

When it seems like there’s no more hope, luckily there is a government office for the Belnaps that can help those with destroyed cash.

“I called the guy the next morning and he said they might be able to help. Ben was shocked. Then the guy told us to bag it in the little Ziploc bags and mail it to D.C.,” said Jackee.

“He also told us that in one to two years, we’ll get our money back.”

Well, they still need for some time before they can pay back the cash but we’re glad that at least they can get the money back.

Skinny to the bone, little girl with cerebral palsy had amazing...

Fall asleep in just 2 minutes with this technique from the...