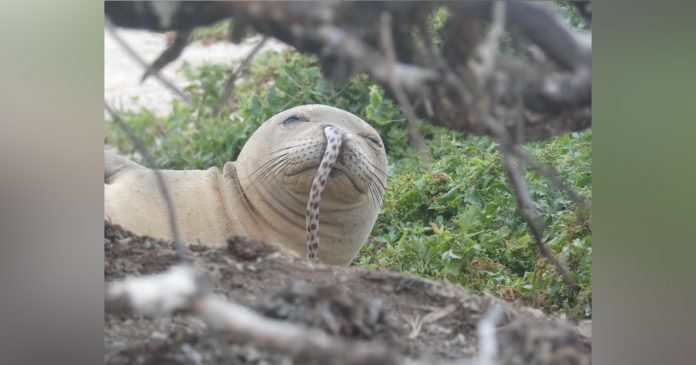 It is not often that we got to see a seal and when we actually see it, hopefully not in the same condition as this one.

When the field biologists walked the beaches of the Northwestern Hawaiian Islands to look for Hawaiian monk seals earlier this year, they were surprised to find a seal in a rather bizarre situation—an eel was hanging out of her nose!

Looking at the weird situation, the field biologist of National Oceanic and Atmospheric Administration (NOAA) Hawaiian Monk Seal Research Program Brittany Dolan quickly snapped the photo of the eel stuck in the seal’s nose and posted it on Facebook.

That was eel on her nose!

Not the first time, that was actually the fourth time in recent years the NOAA teams have found an eel dangling out of a Hawaiian mon seal’s nose. How it happens is also a mystery till this day.

“It’s been a new phenomenon lately. We speculate that the seal ate the eel and then sneezed or regurgitated at the wrong time, and it got stuck,” explained a research marine biologist for NOAA Hawaiian Monk Seal Research Program Jessica Bohlander.

Another seal being observed by researchers during its release into the wild.

Bohlander said that Dolan instantly put down her camera after taking the picture so she and fellow NOAA field biologist Allie Northey could figure out how to take out the eel from the seal’s nose.

Highly trained on how to handle seals in distress, Dolan and Northey still make sure to consult their staff veterinarian before they attempted the eel extraction. With massive precautions, Dolan and Northey snuck up behind the young seal—one of them restrained her while the other one pulled out the eel.

The team said that the number of seals is starting to stabilize after years.

After about a minute of seal wrangling, thankfully the eel extraction was accomplished. Scientists stated that eels stuck in seals’ snouts actually puts the seals’ lives at risk.

“The eel was dead. They have to live in the water so once the seal surfaced, it died. The tricky part is, you want to make sure you remove the entire eel. If you don’t, it could cause more problems,” explained Bohlander.

Another seal being released into the wild after a rescue.

The team released the seal back onto the beach after the rescue and luckily the seal was doing fine. Unfortunately, the eel didn’t make it.