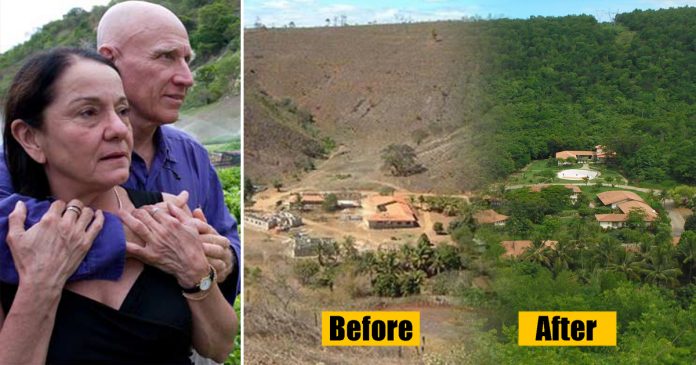 Renowned Brazilian photographer Sebastiao Salgado cherished the forest in his place so much. He was completely horrified when he saw the land he knew since childhood completely destroyed when he returned home to Minas Gerais, Brazil in 1994.

With only 0.5 percent of the land covered in trees, the tropical paradise he once knew has turned into a dusty, barren land. Thanks to rampant deforestation, the forest is no longer there after just a few years.

“The land was as sick as I was—everything was destroyed. Only about 0.5 percent of the land was covered in trees,” told Salgado.

Looking at this situation, Salgado’s wife, Leila made a rather near-impossible proposal. She wanted to recreate the forest and expressed her wish to replant the entire forest.

Salgado fully supported her idea and the couple set out on their ambitious mission.

“Then my wife had a fabulous idea to replant this forest. And when we began to do that, then all the insects and birds and fish returned and, thanks to this increase of the trees I, too, was reborn—this was the most important moment.”

Later, Salgado and his family set up Instituto Terra and planted more than two million trees.

The project transforms the environment and gives homes to more than 500 endangered species.

When the first seed was planted in December 1999, the couple hired around only 24 workers but they were later joined by numerous volunteers over the years.

Soon enough, the forest started to flourish and they even received a donation of one hundred thousand saplings which further gave rise to a dense forest.

Look at it now! Wow!

Salgado’s amazing transformation of the forest has resulted in more rainfall falling in the area and cooler weather, which has brought a drastic and desirable change in the climate.

If you are interested, here is the trailer to a documentary of his amazing work: