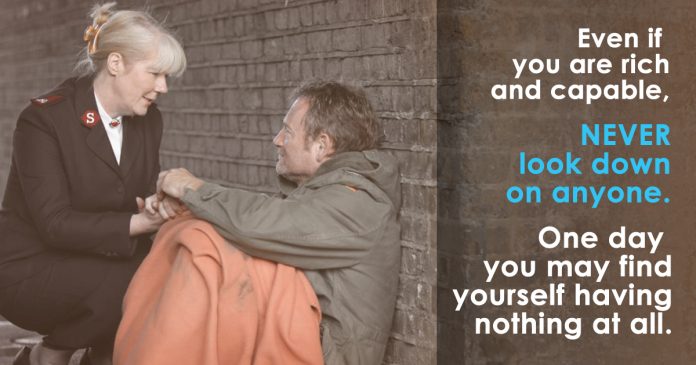 There is truth in the old adage, “You can never truly know what a person is going through until you have walked a mile in their shoes.” Many of us have been guilty of looking down on people whose station in life is below our own.

There is a growing body of research aimed at showing how having money and status tends to change people in a profound way. The latest paper published by the Journal of Psychological Science showed how wealthy people unconsciously pay less attention to passersby while walking through the streets.

We need to remember to stay humble, keep an open mind and respect others despite their social status because you can truly learn something new from anyone.

There is a general stigma that has been so ingrained in us that we sometimes don’t even realize we’re guilty of it. We tend to look down on the poor and underprivileged but look up to the wealthy and powerful.

Our preconceptions about wealth and poverty are so deep-seated that sometimes we think the rich deserve their wealth and the poor deserve their poverty when in actuality it is all arbitrary.

Look at the clean streets that you pass by every day. It is the result of the hard work by the street cleaners.

Look at the house we live in. It is the result of the construction workers who worked hard days and night, rain or shine.

Look at the food we eat. It is because of the farmers who work tirelessly at the farms that we are able to eat.

Some people are fortunate enough to have been born into good homes in favorable societies while others never had the luxury and were born into hardships.

We’d like to think that everyone has an equal shot at realizing their dreams and make a good living but that simply is not the case. Some individuals are born into families with good socioeconomic positions from the start and some aren’t so lucky, which means the latter has to work considerably harder in life just to get by.

In our largely capitalist society, it is markedly easier for people with money to make more and raise their socioeconomic status in society. By the same token, it is also just as easy to lose one’s wealth in the blink of an eye.

So, never look down on people who you deem to be inferior in social status and wealth. Stay modest, compassionate and respectful of the people around you so as to remain grounded and avoid arrogance.