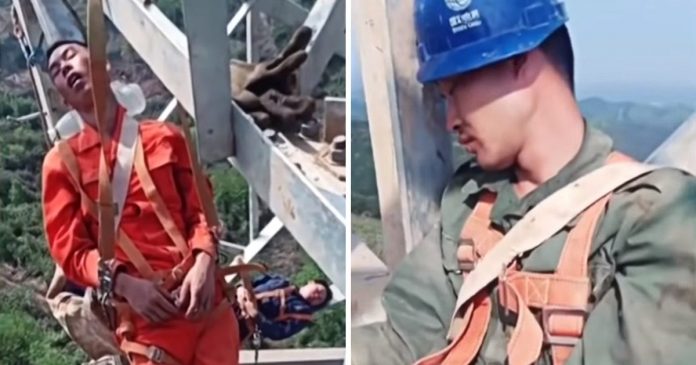 People with high-risk jobs such as window cleaners of tall buildings and construction workers usually have to climb unbelievable heights on a daily basis just to do their job. It’s not easy to get through the day without risking own safety, but it seems that these electric workers have nothing to worry at all.

Some people might not be brave enough even get to half of where they are, but these electric workers from Hunan province, China just casually make a transmission tower as their napping place.

That means they’re taking a rest 164 feet above the ground!

In the short video captured, the electric workers can be seen tied on safety ropes to the pylon’s metal beams while calmly taking their naps. It was reported that these workers prefer to remain in the tower during their short breaks and only descend the dangerously tall tower when it’s time for a meal.

Most of them didn’t have a problem to take a rest high up in the sky.

Looking at how the electric workers taking a nap at such a high-altitude and life-threatening place, many people on the internet expressing their concerns about the safety of these workers and reminding them to be extra careful.

Meanwhile, few others just envied how they can sleep soundly in that kind of place!

Some people envied their fearlessness and said how they will never take on that kind of job because of the fear of height. To them, no amount of money is worth risking for!

These workers are surely brave!

A “Green Community” In Chengdu Provide The Perfect Place For Mosquitoes...