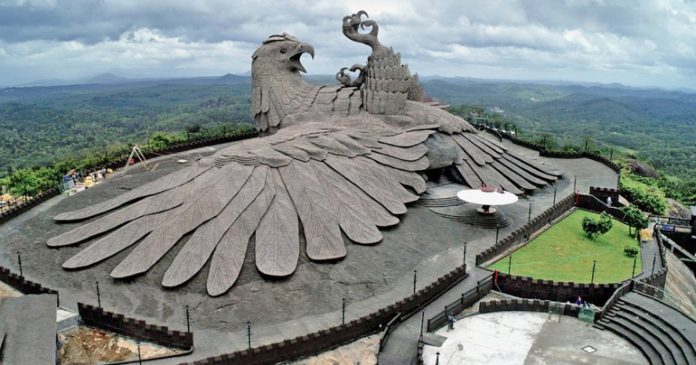 Always dreaming of bringing the mythical bird to life, Indian filmmaker and sculptor Rajiv Anchal came with the idea to sculpt a concrete structure of an eagle in the heart of Kerala, India.

Anchal has this idea for more than ten years. He even presented to build the mind-blowing statue of the eagle during his college days.

“I had presented a model for this sculpture to the Department of Tourism during my Fine Arts College days in the 1980s. Although they were impressed, it didn’t take shape back then,” recalled Anchal.

Known as Jatayu Earth’s Center, the sculpture is 200 feet in length and 70 feet in height with a wingspan of 150 feet—making it the biggest bird sculpture in the world!

Anchal finally had his time to show his majestic art to the world a few years later when he was approached to work on it when a proposal for an eco-tourism project came up.

The giant bird was constructed out of compacted concrete except for the talons—which were made of stainless steel. The project started in 2008 but work on the monument didn’t really start until 2011.

After six years of hard work, it was finally opened to the public in early 2017.

Believed to be the next best place to visit while traveling around India, the bird sculpture is a dedication to the Hindu epic, Ramayana. The Ramayana epic tells a story of a giant eagle who fell while fighting against King Ravana in order to save the Hindu goddess, Sita.

As it witnessed Princess Sita being kidnapped by Ravana, Jatayu tried to stop Ravana but Ravana chopped one of the bird’s wings with his sword.

According to Anchal, the monument is a towering tribute to women’s safety and honor.

“Jatayu also represents a bygone era when humans, animals, birds and other living forms cared for each other and fellow beings and lived peacefully on this Earth.”

The giant bird sculpture can be reached by a winding footpath or by cable car. Helicopter service can also be arranged.

Such a majestic art and symbol!

Kids just love these dolls that look like them—specially made by...