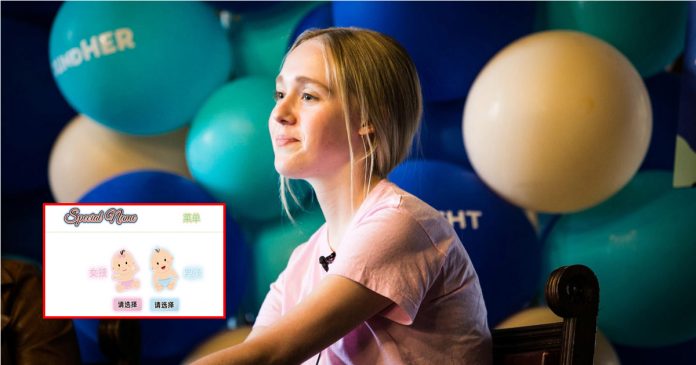 Meet Beau Jessup, the British teen who is paying her way through college by naming Chinese babies.

The impressive 19-year-old has made a name for herself by founding Special Name, a site which helps Chinese parents choose English names which are culturally appropriate for their babies.

So far, she has made hundreds of thousands of dollars with the innovative idea she started working on since she was just 15.

She told CNBC Make It that the whole thing happened because of a “chance encounter”.

While she was in traveling with her dad in China, Mrs. Wang, one of his business associates asked her to help find an English name for her then three-year-old daughter.

“I was honored and surprised. It seemed like a really important thing to do,” Beau said.

Mrs. Wang answered that she wanted her daughter to surprise people.

Beau then chose the name “Eliza” after Eliza Doolitle, the fictionalized character from “My Fair Lady”—Mrs. Wang was really happy with the choice!

She took the genius idea back to the UK with her, borrowed around $1,980 from her dad and hired a freelance web developer.

She started the business all while starting her A-Levels and filled the database with over 4,000 boys and girls names, each linked to five attributes she felt best suited the name.

“A lot of people ask me how I have time to name all these babies.

“Much like Google has time to find everything for everyone all at once, I use an algorithm.”

For a cost of 79 cents, the website provides three names after users choose five qualities they associate with their child.

With the hard earned money, Beau has been able to pay back her dad, fund her university fees and even invest in a property!

“I still update the database each month, but the business is fully automated, allowing me to focus full-time on my studies,” Beau said.

She’s now studying social anthropology at the prestigious London School of Economics and is planning for future business endeavors.