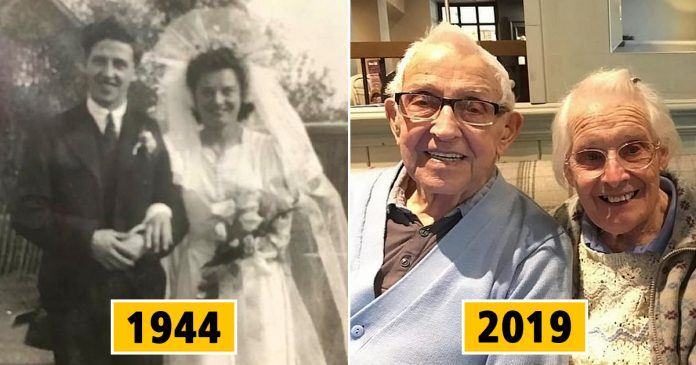 Real love exists and the love this couple has for each other after all those years is the proof.

Lancashire couple the 95-year-old Jim Richardson and his 94-year-old wife Irene got married on April 22, 1944. Recently, the couple who is both in their 90s has returned to a church to renew their vows on their diamond anniversary—exactly 75 years later after they tied the knot.

The retired pair who are both farmers met at a village dance when they were 20 and 19, in the midst of the Second World War.

Richardson proposed to the love of his life, Irene during a bike ride—stopping at a local woods to pull out the ring and get down on one knee.

Richardson has always regretted not thanking his late mother during his original groom’s speech, so his granddaughter Sandra Taylor planned a vow renewal ceremony so he can pay a tribute to his beloved late mother. The event was conducted at 2 p.m.—the same time they took their first vow.

As the service took place on their wedding anniversary, the couple sat and stood in the same exact positions they had during their original ceremony.

“It went amazing, We got photographs of them leaving the front door. They were very excited about it. The blessing was just lovely,” told Taylor reminiscing the day of her grandparents’ vow renewal ceremony.

The couple after their ceremony.

The couple was cutting a celebratory cake.

On the day of their wedding day in 1944, Richardson and Irene had to be driven to a photographer’s in Preston for their wedding photographs. They later returned for a hot buffet and an evening reception with tea and cake.

On the recent service, Taylor requested that Richardson’s late mother received a special mention during the prayers so her grandfather could fulfill his wish to thank her.

The couple returned home to toast their ceremony with champagne after the service.

This is the real #couplegoals we should all be looking up to.

Taylor also shared that the secret to her grandparents’ loving marriage is that they love each other very much and they always do talk about things like it’s a routine.

Such a lovely couple. We wish both of you more years to come!