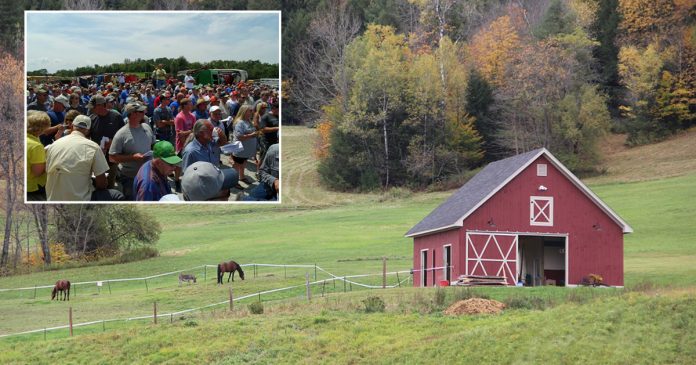 David lives in Nebraska, USA and his family has been farmers for as long as he can remember. For decades, the family has been using the land belonged to his ancestors. However, an unfortunate decision willed the land to a relative who did not have the family’s best interests in mind.

That means David’s family’s land of 80 acres has been sold to a distant relative and what they had spent building for decades vanished upon their eyes—just in a split second of bank interaction. But David never stops dreaming of getting back the family’s land one day to rebuild their business.

Several years after losing it, the family land suddenly appeared on auction.

The moment they hear about it, David and his father decided to do their best to get the land back—including spending sleepless nights trying to come up with every possible way to acquire the assets and reclaim their land.

But on the day of the auction in 2011, more than 200 farmers gathered. That very moment, David and his father felt that their chances to win the family land back were slim. However, they still wanted to give their best shot. Once the land was announced by the auctioneer, they placed their bid and held their breath.

They anxiously waited to see who would place their bid next, but suddenly the room was silent—nobody bids after them.

The auctioneer was stupefied but he still made further attempt to solicit a new bid—and got another silence. After three times, not a single farmer placed their bid except for David. The auctioneer finally had no more choice and gave the auctioned land to David and his father. It felt like a miracle—those 200 farmers from Nebraska, USA knew the right thing to do.

“I’ve had two profoundly humbling days in my life. The first was the day my son was born. The second was that unforgettable day at the Auction House,” recalled David.

It’s amazing how all of them are so respectful towards David and his father and did an amazing thing to give them back their family land.

Fall asleep in just 2 minutes with this technique from the...