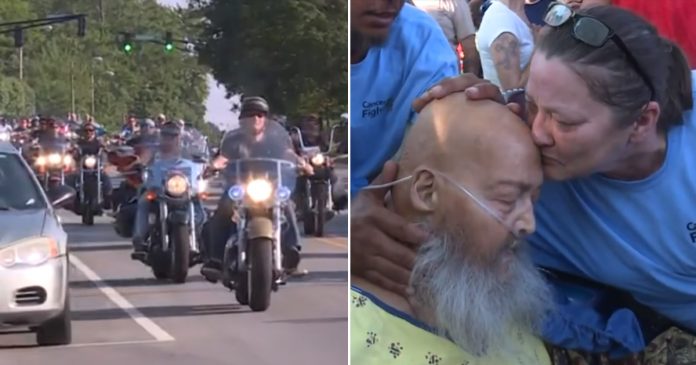 Once a biker, always a biker. The 61-year-old Jon Stanley used to be a biker back then, long before he was diagnosed with terminal cancer. While battling with lung and brain cancer, Stanley has one final wish.

Used to be free on the road riding his amazing bike, Stanley missed the roar of his Harley and he was lucky to have friends that are more than willing to fulfill his final wish—he wanted to hear that majestic roar once again.

This is Stanley a few years ago.

When Stanley was too ill to move around and was basically relying on a respirator to breathe, his brother-in-law Michael Smith knew that he needed to be quick—he found a way to contact a local biker, David Thompson.

Stanley was terminally ill and relying on a respirator to breathe.

His wish was to listen to the sound of Harley one last time.

“I was contacted this morning, about 6:30 this morning by Mike Smith through Facebook—and he informed me about Jon, you know he’s terminal, and he’s not looking really good, and one of his wishes was to hear a bunch of motorcycles out his window,” told Thompson.

Thompson quickly spread the news on Facebook and managed to gather 200 people from different cities, regions, and districts,

With more than 100 motorbikes to fulfill Stanley’s final wish in just six hours.

He requested for the bikers to assemble at Stanley’s house in South Bend, Indiana so Stanley gets to listen to the sound of the engines.

“Sometimes a dying person’s last wish is just to hear the sound of a Harley in their window. This is Jon Stanley he has terminal cancer. I personally met with his family this morning and learned Jon is a vet and was an abate member who has rode for years,” told Thompson.

Some bikers were emotional and shed tears when they witnessed how happy Stanley was at the gathering.

All these bikers gathered outside with engines revving and purring when Stanley was laying on his bed. So Stanley’s family decided to carry him outside and sit him in a sidecar to feel the vibrations for the last time.

After enjoying the feeling of that one last rumble and get on a bike one last time, Stanley passed away just a couple hours later in the arms of his wife.

May he rest in peace.

Dog owner describes heartbreaking reason his dog stares at him every...