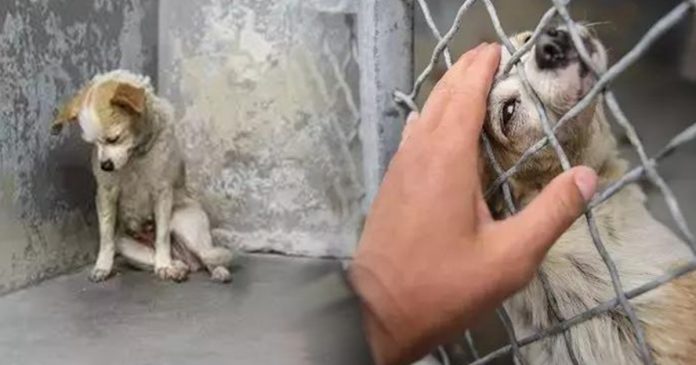 The majority of animal shelter populations are comprised of strays, animals rescued from cruelty and surrendered animals which are animals who the owners can no longer care for.

John Hwang is an advent photographer and animal lover. He spends most of his free time visiting animal shelters so he could take photographs of its occupants. He then posts the pictures he takes online in hopes that someone may want to take one of the furry creatures home.

The animals would usually perk their ears and wag their tails as he passed them in their shelter, except this one dog who looked absolutely dejected.

He visited the Baldwin Park shelter in Los Angeles recently and as he walked through the shelter, passing the rows of kennels with hopeful faces peeking through, he noticed one dog that was not as excited as the rest.

The little pup refused to acknowledge John’s presence as it sat in the corner of its kennel staring at the floor.

“I just kind of peeked in and saw this little raggedy dog,” he said.

“She was just in the corner far from the fence, up against the wall. I figured she was one of those little dogs who was really scared and probably wouldn’t interact with me,”John further explained.

John took several photos and as he was about to walk away, the pup slowly limped towards him and leaned against the fence. The photographer pets the little thing and realized its fur was extremely matted and she had trouble opening her eyes because they were infected.

“She came right up to the fence and totally pressed her whole body up against it,” John recalls. “She just wanted me to pet her. She was so sweet.”

The 10-year-old dog had made an impression on him as he says “It actually made her even more endearing. I thought this poor little dog must have had a rough life. I could have spent all day with her. That’s all she wanted.”

Netizens had also taken to the pup “So many people were in love with this dog and doing everything they could to try to get her out,” he says.

An organization called Leashes of Love Rescue reached out to John and a volunteer from the group named Cathi Perez picked up the dog as soon as the shelter cleared her for adoption. They named her Annabelle and in a few days, she will be following her new family to her forever home.

“She was so excited to be out of her kennel. Just to be out and walking around,” Cathi said.

She also noticed how happy she was the moment she got out. “She was immediately not the same dog.”

Looks like John’s effort did not go to waste and found Annabelle her forever home.