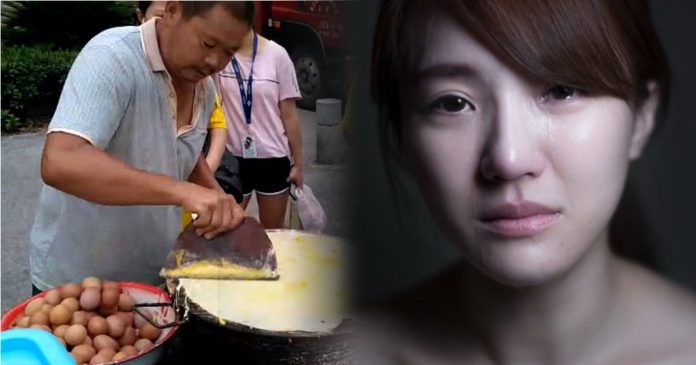 8-year-old Yu Miao was making her way to the entrance of her elementary school as usual when something caught her attention. She was drawn to a street vendor selling pancakes. Little Yu Miao couldn’t resist the delicious aroma that wafted out from the cart and decided to stop by the street vendor. She asked in a timid voice, “Uncle, are opening here today?”

The vendor was startled by her presence and bore an excited look on his face. He smiled and said, “Yes, would you like a pancake?” She pulled a long face and replied, “I do, but my dad doesn’t let me eat food by the roadside, he said it’s not clean and I don’t have enough money for it.”

The vendor quickly washed his hands to convince the little girl that she has nothing to worry about and made a fresh pancake for her saying, “You can rest assured that my pancakes are clean. So, if you want to eat pancakes, come to me and I will not charge you.”

The young girl was skeptical as her father has said there is no such thing as free meals in this world. The street vendor smiled and made a proposition, “I will let you have a pancake, if you teach me how to read and write.”

She hesitated at first but thought that the exchange was fair and they shook on it.

The vendor then proceeded to make her a big, crispy pancake.

In the blink of an eye, Yu Miao graduated from elementary school and moved on to a junior high school. She thought the agreement she made with the pancake man would end but to her surprise, he moved his cart and situated it near her new school.

She was delighted since she always craved for the pancakes if she did not have any for a few days.

Years passed and before they knew it, Yu Miao had turned 28 years old with a husband who loves her and a pair of lively twins by her side. She had seen people come and people go during these two decades but the only person who remained constant through the years was the pancake man.

She felt a strong connection to the elderly pancake man, so much so that she even invited him to her wedding nearly five years before. He politely declined the invitation only to show up outside her wedding venue wearing a suit and a tie with tears in his eyes.

One day, her father became extremely ill and when he was in the intensive care unit, he passed her a note and said this will explain everything but he instructed her to open it if he did not recover.

Soon, her father passed away and Yu Miaoyi remembered the letter he had given her and ventured to read its contents. She could not believe what she read!

It said “Miao, I am so sorry you had to find out this way, I regret not telling you this sooner but I thought you would not forgive me if you found out. The truth is, I am not your real father. I could not have children of my own but I found you by the street and thought your parents had abandoned you so I took you in and cared for you as my own.”

“I did not expect your real father to find you. I was not going to let him take you away from me so I told him to leave. I told him you would end up poor like him if he took you back, I can provide a better life for you.”

“He left without a word and when I look back on this memory, I realize how cruel I had been. I made him promise me he’d keep your relationship a secret and he agreed. He’s been looking after you all this time though, he owns a pancake cart and you should recognize him. I loved you as any parent loved their child but he is your real father. I hope you can find it in your heart to forgive me for keeping this a secret for so long.”

Yu Miao felt hot tears stream down her face as she quickly drove to find the pancake man. She met him at his usual spot and watched him. He was old and frail now and no longer the man she met when she was in elementary school. She approached him and shouted over and over again, “Dad… dad!” He was surprised and she handed him the letter.

She threw her arms around him and said softly, “Dad, thank you for watching over me.” The pancake vendor wept as he had longed for this day for so long.

My creepy stalker became my roommate’s boyfriend. After so many years,...