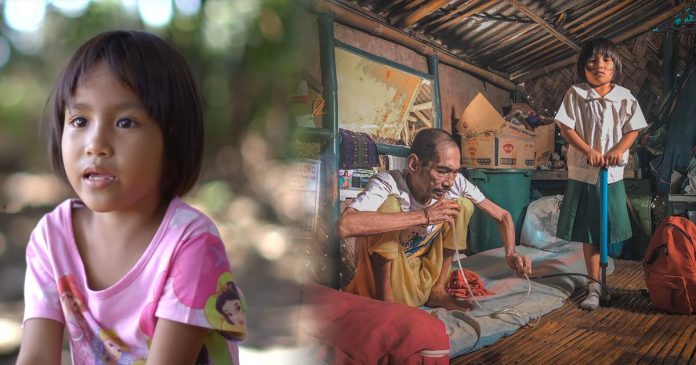 Access to affordable healthcare has been an ongoing issue worldwide where a significant number of people are still living below the poverty line. In such circumstances, the people are forced to make unlikely decisions in their day-to-day living.

Catherine Cadiente, 6 resorted to such a decision to help her sick father.

Being resourceful, she turned a bike pump into a makeshift nebulizer to ease her father’s breathing difficulties.

Tatay Eduarto Cadiente and his family belong to the 25% population in Philippines who live in economic poverty. He suffers from emphysema and is home-bound. Tatay’s ailment inhibits him from doing any physical labor, as it would only result in deteriorating his breathing.

His wife, Noradia is the sole breadwinner, leaving both Catherine and her elder brother, Eduardo Jr. to take turns tending to their father. Even then, they couldn’t afford an actual nebulizer due to their financial restraints.

In a Facebook photo circulated recently, a school uniform-clad Catherine’s unconditional love for her father can be seen as she pushes down on the bike pump with all her might while her father sits on the floor holding the receiving end of the nebulizer in his mouth.

If a picture is worth a thousand words, this one definitely speaks millions!

The post made rounds on social media and has been featured on Front Row, a documentary show. Since then, Catherine and her family have been receiving financial assistance as well as donations of food and medicines on the regular.

Netizens were touched by the young girl’s love for her father and commended her pure heart and compassion.

Through her selfless act of love, Catherine reminded us that as children, we should all appreciate our parents before it’s too late.

A daughter’s first love is always her father.

This Russian man spent three years of his life in prison...