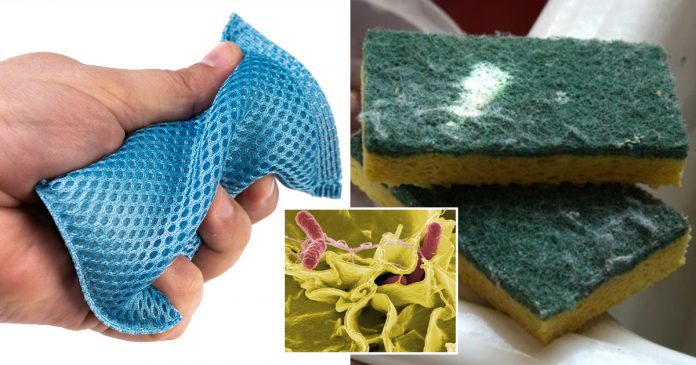 Did you know that kitchen sponge is actually one of the dirtiest things in your home—way worse than the toilet bowl and that trash can?

Scientists consider that kitchen sponges are the largest collector of active bacteria in the entire household.

As bacteria gathers on the kitchen sponge, it is recommended to change it once every week as changing it once a month will not be sufficient. Even worst, there’s actually no way to clean it properly in order to eliminate the bacteria that is harmful to human health.

A study has shown that sponges that are regularly cleaned by placing them in a microwave or immersing them in boiling water are not any cleaner than sponges that have never been cleaned before.

Health experts explained that kitchen sponges are an ideal place for incubation of microorganisms as it has porous texture. Shockingly, there are more than 54 billion bacteria can incubate in a cubic inch size of the kitchen sponge—with 362 belonging to different species.

Scientists also found bacteria such pathogens that can cause food poisoning and cholera trapped inside the disinfected sponge. Confocal microscopy and microbial analysis of used sponges have revealed massive colonization by pathogenic bacteria such as Chryseobacterium, Moraxella and Acinetobacter species that can cause meningitis and lung inflammation.

Porous texture of the sponge making it an ideal place for microorganisms to grow.

The bacteria identified by a DNA sequencing method on samples of 14 different kitchen sponges, the Moraxella osloensis is the bacteria known for giving your underwear an unpleasant smell. It can also cause infections in people with compromised immunity.

Disinfecting sponges in a microwave doesn’t eliminate bacteria but the pathogenic bacteria that survives the disinfecting process will rapidly multiply to reach the same numbers as before the pre-cleaning process and becomes more dangerous.

This is because the pathogens become more resistant and re-colonize in the porous sponge as less harmful bacteria die after the heat exposure.

So the only thing you can do to improve the hygiene in your kitchen is a more frequent change of the kitchen sponges.

Choose which couple looks the happiest and it will explain more...