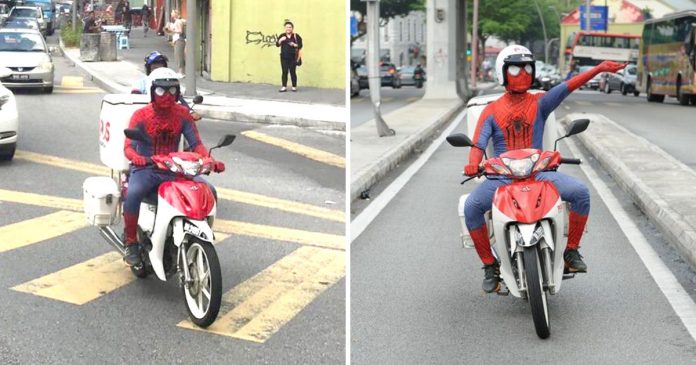 The excitement over Avengers: Endgame doesn’t seem to be going anywhere anytime soon and it turns out that this particular Malaysian postman caught the fever too!

In an entry shared on Facebook, Pos Malaysia updated a photo of one of their postmen delivering mail dressed as Spiderman, casually riding his bike. The photo continues to amuse Malaysian with its hilarious caption too.

“After defeating Thanos, Spiderman gets back to his permanent job,” says the caption with series of playful hashtags.

In the photo taken near a famous tourist destination in Malaysia the Central Market, Pos Malaysia emphasized that the reason this photo being shared to the public was for Malaysian to appreciate their own unsung heroes like these postmen, who have been working very hard to deliver thousands of letters every single day.

The viral photo has now gained more than 2,000 likes, 450 comments and more than 600 shares on the internet.

He didn’t forget to drop some pose.

Looking at the viral photo, a user jokingly commented that this is what happens when you have to save the world at 11 A.M but you need to get back to work at 12.

No extra time to change that superhero suit.

Despite being hard at work, the spiderman-postman was proven to be quite friendly too when he was seen having a short chat with fellow citizen while waiting at the traffic light.

This good superhero shows such a good example by following the rules too.

If you’re having a hard time today, remember that this Spiderman is working hard trying to make ends meets too.

And most importantly, keep all the spoilers to yourself if you’ve seen the movie!