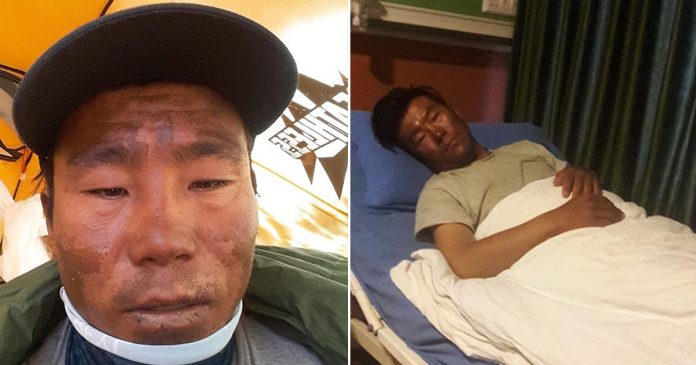 He was descending down from the summit of the 8091-meter high Mount Annapurna in the Himalayan peaks when he suddenly lost consciousness in the presence of his guide, Nima Tsering Sherpa.

A rescue team under Seven Summit Treks was dispatched on a search for Dr Chin after he failed to return to the nearest camp located at about 1 km below the peak with the other climbers.

Rescue team’s Facebook updates on the whereabouts of Dr Chin.

Meanwhile, Nima gave away his only remaining oxygen cylinder to save Dr Chin as he was out in the cold stranded for two consequent nights. According to the sherpa, Dr Chin had two cylinders of oxygen with him, but eventually ran out of it. He tried making an emergency call to Camp IV with Chin’s satellite phone, but to no avail.

Deprived of oxygen himself, Nima recalled encountering severe headaches and struggling to catch breaths out of the thin air. It didn’t help that they were at such a high altitude with lack of resources, but Nima carried on.

After a descent of five dreadful hours, accompanied with frostbites and injuries to the spine, he stationed Dr Chin safely back to Camp IV on April 25th.

Unfortunately, according to news report on May 2, Dr Chin did not survive.

As for Nima, he was hospitalized for two days due to high altitude cerebral edema.

Sherpas are the mountain natives of Nepal and are generally well-versed in climbing and trekking of the Himalayan range. They use their skills and knowledge to work as mountain guides and aid in expeditions and rescue activities.

6yo helped out parents’ salon and mastered skills in two years,...