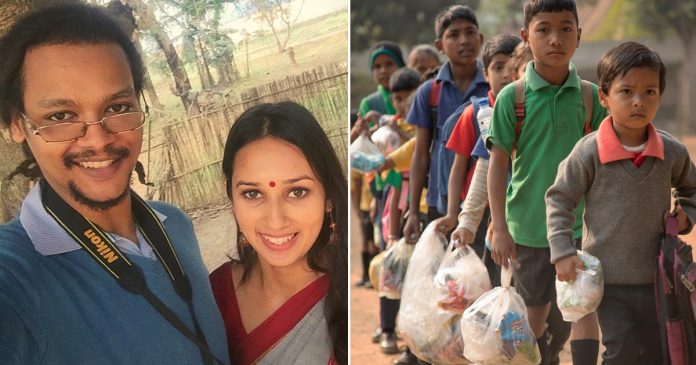 It was 2013 when Mazin Mukhtar and Parmita Sarma first met in India. They had one common aspiration—to foster a change in the field of education. Three years later, in 2016, their passion led them to build Akshar, a sustainability-driven free school in the heart of Assam.

A small school that started off with 20 students now has almost 100 students aged between 4 and 15. These young minds are being taught the importance of education, environmental sustainability and giving back to their community by getting them fully involved in the school’s every activity.

The population in the village of Pamohi are mostly underprivileged. The kids especially, are sent off by the parents to work in stone quarries nearby for an additional source of income of Rs150-200 per day.

Now, these kids have a chance to study. All they need to do is to bring plastic waste as school fees.

The first challenge the couple faced was to convince the villagers to send their children to school. The second challenge was to eradicate the extensive use of plastic waste in the village.

According to Parmita, the villagers would pile up large mounds of plastic waste, burn them and warm themselves in front of it during the winters. They didn’t know that the toxic fumes released from burned plastic is hazardous for the environment as well as for them.

They figured out the ideal solution to provide education AND create awareness is by utilizing the plastic waste for a better purpose. Each student would bring a polythene bag full of about 25 items of plastic waste weekly as fees and have them recycled.

Students help teachers to upcycle plastic waste that can help in creating better infrastructure in the school.

These initiatives received such great response from villagers that they volunteered to participate in the recycling drive to help spread awareness by putting up signs in their homes and shops.

Additionally, the school’s curriculum administers a mentorship peer-to-peer learning model. Older students would teach the younger ones, and get rewarded in toy currencies. The notes are then traded in a nearby shop for shoes, snacks, toys, clothes etc.

Students of Akshar are taught by their level of knowledge, instead of grades.

In India, many children are fortunate enough to have private tutoring or educated parents at home. They need that…

Mazin and Parmita are planning to set up 100 more Akshars in the next five years. With a vision as determined as theirs, we are certain that they could achieve their goal to continue inspiring one village at a time!

Here’s a video glimpse of what Akshar is all about.