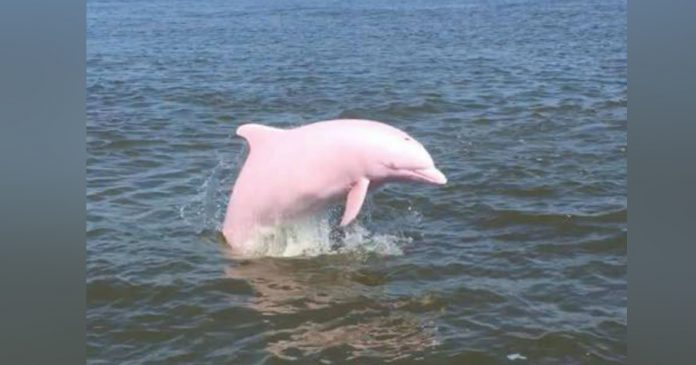 Some of us might have read about the sight of a rare pink dolphin gaining the attention of people in the Calcasieu Ship Channel in Louisiana. When she was first spotted in June 2007, Pinky was a baby still.

Pinky became so famous that she has a Facebook page of her own!

What made her stand out from the rest of her pod was her bubblegum pink body. Dolphins are generally grey in color, with a tinge of pink on their belly. Lack of melanin production in their cells, according to scientists, may result in discoloration of the body and make them ‘pale’. Technically, Pinky is an albino.

A local charter boat captain named Erik Rue is claimed to be the first one to have seen Pinky. He recalls having the bubbly mammal swim close enough to his boat for him to catch a few glimpses of it. Additionally, he managed to take a few photographs of her happily cruising the river with her pod.

Many assumed Pinky was female because well – she was pink. It was only confirmed in 2015 when few visitors, including Rue, claimed to have proof of her mating. Naturally, people started to anticipate Pinky giving birth to more pink dolphins.

In 2017, a couple even claimed to have seen a pair at the very same location. Then, a year later in 2018, it became official.

A Facebook video posted by Thomas Adams confirmed the speculation that there are indeed two pink dolphins swimming in the body of water in the presence of a large ship. Undoubtedly, it was Pinky with her adorable baby calf! What a beautiful sight it must have been!

Pink dolphins have the largest bodies and brains of any freshwater dolphins. It is estimated that there are currently close to 9000 pink dolphins around the world. They are mostly found in Hong Kong and the Amazon rivers.