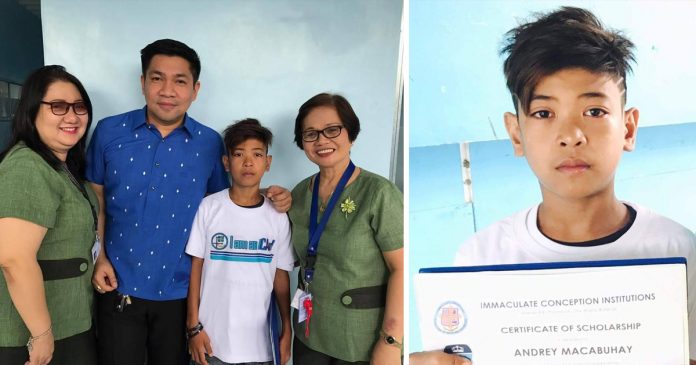 Honesty is the indeed best policy. The 13-year-old boy Andre Macabuhay is a parking lot boy at one of the famous food chain restaurant branch when he suddenly found a wallet.

The wallet was not empty but contained P7,000 (around US$ 135) in it. Being the honest kid that he is, Macabuhay quickly returned the wallet and the lost cash he found without any hesitation to its owner Dindo Lorenzo.

Macabuhay’s story spread like a wildfire on the internet and went viral almost immediately when it was posted on social media.

The online community complimented the young boy for showing an honest attitude and restoring humanity.

Thanks to his good heart and the act of honesty, Macabuhay received a scholarship grant worth P400,000 (US$ 7,727) that can sustain him from elementary to college years.

He received great rewards for his honest act.

The grant that Macabuhay received.

Aside from the grant, Macabuhay received free uniform, school supplies, and allowances. The young boy also received financial aid from good-hearted people so that his sick mother can start a small business and set up their own store.

He also received financial aid for his sick mother.

The honest boy didn’t forget to thank Dindo Lorenzo for posting his good deeds on social media and gained him so much love and support from a lot of people.

Macabuhay thanked Lorenzo for posting about him on social media.

Macabuhay also expressed his gratitude to Neil Matthew for the reward he received and Atty. Normita Villanueva, the president of the school he was studying.

“Thank you so much, Dindo Lorenzo. Thank you Mom and Dad, for always preaching about what is right. Thank you Sir Neil Matthew who gave me great rewards for a simple thing I do, and thank you Atty. Normita Villanueva, president of the school I am currently attending,” said Macabuhay.

“Also thank you everyone who supported me. To all my friends, keep on doing what is right and be honest, always fear God and love our family.”

May God bless him!