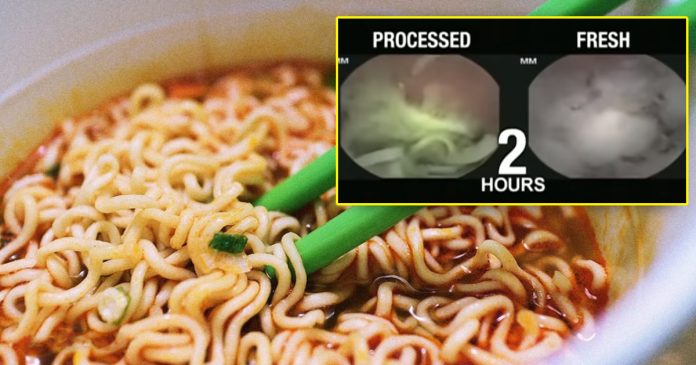 When it comes to a cheap, quick and delicious meal, it can’t be denied that instant noodles is one of our favorite choices. It is cooked in no time, but did you know how long does it actually take to be broken down in our body?

If you’re thinking of having ramen noodles for a quick fix anytime soon, you might want to drop that thought after reading this.

Or you might even want to consider dropping it out of your diet once and for all.

Dr. Braden Kuo, a gastroenterologist from Massachusetts General Hospital recently conducted a study on how the body digests the precooked and dried noodles.

Using a camera with the size of a pill to capture the effects of ramen and other pre-cooked noodles have on the body, his recorded footage showed shocking results.

While fresh homemade ramen noodles got instantly digested in just 1 to 2 hours, the instant noodles which are laden with preservatives like tertiary-butyl hydroquinone (TBHQ) did not easily break up—it was mostly intact and undigested in the stomach even after two hours of consumption.

“The most striking thing during the time intervals of two, four and six hours was the degree of breakdown of Ramen noodles. At two and four hours, the particular size of the Ramen noodle was much larger or formed than the homemade Ramen noodle at each of those time points, suggesting Ramen noodles were difficult to break down into extremely infinite particulate matter during the process of digestion,” explained Dr. Kuo.

How the noodles look like after 20 minutes of digestion.

How it looks like after 2 hours of consumption—still not completely broken down.

Tertiary-butyl hydroquinone (TBHQ), the main preservative in instant noodles is believed to cause sickness, increase the risk of tumors and cancers, and weaken organs if eaten in routine over a long period of time. Besides TBHQ, a chemical compound called propylene glycol is also used in ramen to maintain its texture when cooked in hot water.

Besides the chemicals existing in the instant noodles itself, sodium, corn syrup, palm oil, monosodium glutamate (MSG) and few other ingredients that made up the whole cup noodles also come with their own side-effects. Even the cup used for instant noodles usually contains bisphenol A (BPA) that can enter our bodies when we cook ramen by adding hot water to the cup.

BPA that usually exists in the cup is a type of chemical that can destroy metabolism.

“We don’t understand the impact to a degree of digestion, but what we do have is a striking visual image to begin the discussion. But I can’t say for certain at this point whether ramen noodles will have an impact on health or nutrition or absorption,” said Dr. Kuo.

In a study in medical periodical The Journal of Nutrition, women in South Korea who ate more instant noodles were found more likely to suffer from metabolic syndrome. Those with metabolic syndrome can potentially suffer an increased risk of developing heart disease and diabetes.

Well if you feel that cutting ramen out of your life is impossible, a professor of nutrition and epidemiology at Harvard Dr. Frank B. Hu told The New York Times that eating instant noodles once or twice a month is not a problem, but you might want to reconsider eating a few times in a week.

I guess it’s the time for us to be part our ways, ramen.