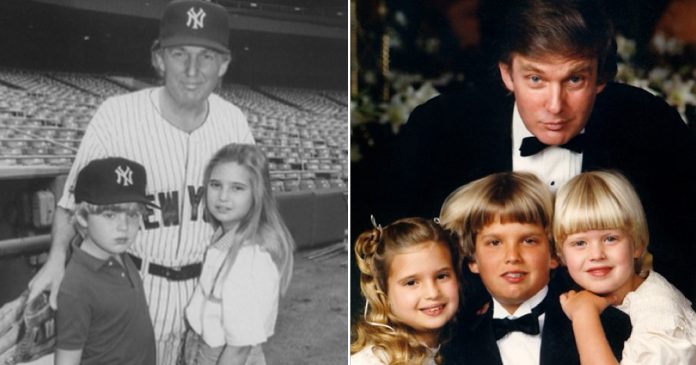 In between his hectic lifestyle and hundred million dollar net worth, President Donald Trump is quite a family man.

He has always been supported by First Lady Melania Trump, 13-year-old son Barron and four other children from previous marriages throughout his political career, the President of the United States is very well aware of what’s most important in life—family.

Being a caring and active father

Anecdotal evidence from his children over the years suggests that Trump was a caring and assertive father. He instills strict behavioral standards for his little ones since their early years and has always been an active father. Besides his busy schedule, Trump never fails to accompany his children to sporting events—just like when he went to the US Open with son, Eric.

And when he went to the baseball game with daughter, Ivanka.

Had to retweet my sister's great #Instagram pic of us for #TBT "@IvankaTrump: Spring training. #tbt" @realDonaldTrump pic.twitter.com/qyiepnNzBl

Also when he didn’t leave out Donald Jr. for a baseball game.

Now 36-year-old, Ivanka has always been very vocal about her affection and appreciation for her father.

“Every morning before school, we’d go downstairs and give him a hug and a kiss,” told Ivanka in an interview with New York magazine in 2004.

Happy, happy birthday Dad! I love you very much.
Wishing you your best year yet!!! pic.twitter.com/ejbk28IJHe

Trump’s daughter with his second wife American actress and television personality Marla Ann Maples, Tiffany is equally loving when it comes to her father as she posted a throwback photo of them.

“I’m so grateful to have such an intelligent, hardworking, and hilarious person like you in my life.”

She didn’t forget to wish her father a happy birthday too!

Encourage competency all the time

During their childhood, Ivanka recalled how Trump children have always been bred to be competitive.

“Dad encourages it! I remember skiing with him and we were racing. I was ahead, and he reached his ski pole out and pulled me back,” told Ivanka.

Trump with his children, Donald, Ivanka, and Eric 26 years ago.

With being competitive as the basic, Trump’s effort to instill strong characteristics in his children extended to their moral behavior too. He strictly warned his children away from the perils of intoxicants and won’t accept any deviant behavior.

‘No alcohol, no cigarettes, no drugs’

When asked about how Trump protected his young children from the temptation of substance abuse, his answer was quite simple. The president allegedly used to address his children every single morning before they left for school telling them not to take drugs, drink alcohol, or smoke cigarettes.

“When my children were growing up, even when they didn’t know what drinking was, I’d say ‘no alcohol, no cigarettes, no drugs’,” recalled Trump.

It was quickly agreed by Ivanka and Eric as they confirmed receiving this stern wisdom themselves every day of their life and every morning before school. Trump’s conviction to this was most probably because he witnessed his older brother Freddy’s battle with alcoholism and tragically died in 1981. Since that day, he has sworn to never touch a drop himself.

So how did Trump’s parenting skills fare?

Thanks to this protective nature and good family values that he religiously holds on to, all of Trump’s children grew up to be just as successful as he is.

Looking at how successful all his children are, we can safely say that this parenting tactic works wonder!