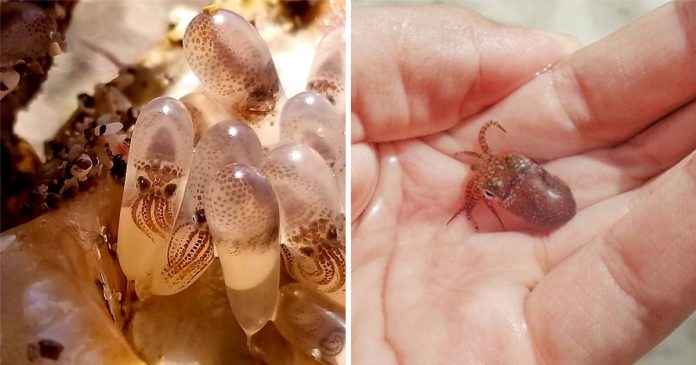 Squid-based dishes are nothing uncommon for many of us as we might have seen them in the night market or street snack bar. In Asian countries, fried squid and grilled squid are almost like a national food as you can find them anywhere.

But as familiar you are to the squid, have you seen how squid eggs look like and how the hatching takes place? This Reddit user with the username Rockyroo529 sure is lucky when he got a chance to witness the squid eggs with his own eyes.

Sharing the extraordinary sight with the curious people on the internet, Rockyroo529 posted the picture of squid eggs on Reddit. In his post, Rockyroo529 mentioned that his nephew found a seashell.

To their surprise, there’s a bunch of squid eggs hidden inside—and it looks exceptionally strange and interesting at the same time.

The unhatched baby squids are living inside their individual small pouch with a rather transparent exterior. Probably around the size smaller than a human finger, the baby squid has a cute pair of big eyes and short tentacles ready to roam the sea one day.

Looking at it, a Reddit user commented on his astounding picture of the little sea creature.

“How can something looks so angry and be so cute at the same time?”

We couldn’t agree more. Besides the fascination towards the squid eggs, many were asking about the condition of the eggs and wondering what happened to them.

“Please tell me you put the seashell back in the ocean so they could hatch.”

Confirming that he didn’t do anything weird or dangerous to the squid babies, Rockyroo529 reassures the people that he indeed put them back in the ocean.

“Yes, we did put them back in the ocean. We can’t stand it when people take stuff they find when snorkeling home. That’s alive I mean. One time there was a guy who showed us the hermit crab he ‘saved’ by pulling out of its shell. We didn’t have a response for his stupidity,” told Rockyroo529.

If you’re curious how they will hatch, here’s a video: