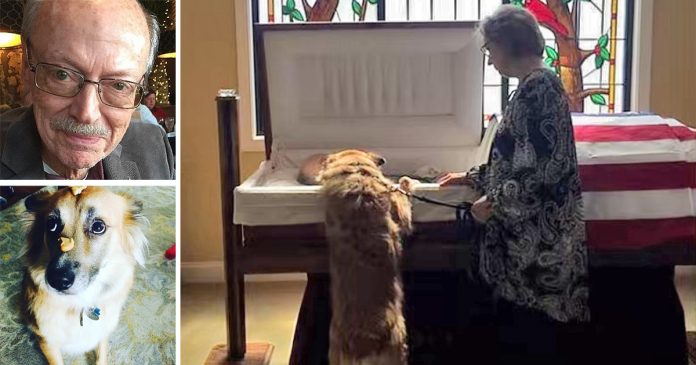 Despite rescuing their dog, Chief in 2014, Anne Marie Sibthrop was on the verge of letting him go; because she was too old and the pooch was too young to be taken care of. All it took was one good look from Bill Schiller to change her mind.

“We’re keeping that dog”, he said.

Since that day, Chief and Bill became inseparable.

“There’s a certain chemistry between a person and a dog when they’re really special. They bonded; they belonged together”, said Anne Marie.

She recalled him standing tippy-toed on his hind legs, stretching his neck in as far as he could and giving Bill just ‘one little quick lick on his ear’.

Anne Marie and Bill were dating, so Bill would often visit her and Chief in Huntersville, North Carolina. When he was diagnosed with dementia late fall 2017, he moved in with Anne Marie. There, he spent most of his time with his canine companion. Chief was wild and strong, but in the presence of Bill, he seemed to know how to keep his tails in check.

For most of his lifetime, Bill was caught up with work so he never really had time to own a pet. He had one, but only for a brief time.

Chief was the only actual pet he had, so theirs was a bond so pure and genuine.

As Bill’s health was deteriorating, he wasn’t able to open his eyes and look as much. He was conscious but weak.

“I took Bill’s hand, and I put it over on Chief’s head, and Bill smiled. And he just petted him”, said Anne Marie.

Chief went on to visit his ‘daddy’ in hospital and nursing homes where he received treatments. He not only comforted Bill during his final days, but even the other patients enjoyed petting him.

Though Chief was the sunshine that has brightened everyone, it’s undeniable that Bill was the light of his life.