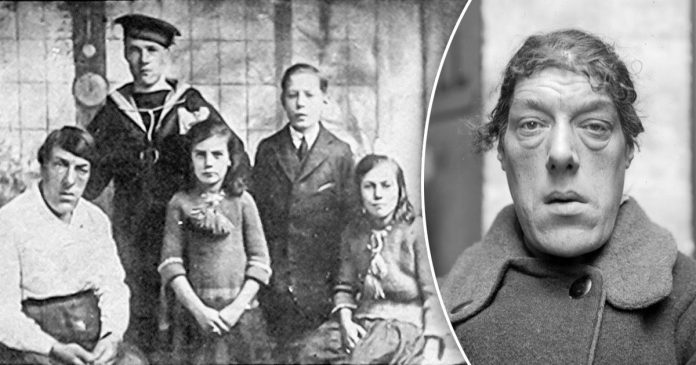 Raising a child is not an easy thing to do and Mary Ann Webster (Bevan after marriage) knows that better than anyone else.

Despite her unusual appearance, Bevan is very well aware that there’s nothing can stop her from doing everything it takes to achieve her ultimate goal of feeding her children—even if that means being an object of ridicule.

Was born to a large and poor family in London, Bevan had to start working very early and took up the job as a nurse in a hospital.

She was an attractive lady and got married to Thomas Bevan at the age of 29. They were blessed with four children.

She led a normal and happy life until she suddenly started experiencing health problems—migraines and muscle joint pain. Barely had time to focus on her own health, all of a sudden Bevan started to suffer weird symptoms such as abnormal facial growth and distortion.

Bevan no longer looked like how she used to be and had to overcome cruelty, mocking, and insults from the people. Doctors couldn’t really understand what was going on at first, but it turned out that Bevan has a disease called acromegaly.

Her appearance slowly changes as she suffers from the disease.

Acromegaly is a neuroendocrine disorder that results in an excess amount of growth hormones in the body. This leads to the bone, internal organ, and soft tissue enlargement—explains why she has been having headaches and muscle pain. In most cases, acromegaly occurs due to a benign tumor—the pituitary adenoma.

After 11 years of marriage, Bevan’s husband dies and she turned into a widow with almost no money. So Bevan accepted any job she could in order to feed her children.

Unfortunately, she wasn’t offered any good job because of her appearance and people kept on making fun of her looks.

One day, Bevan found out there’s a contest for The World’s Ugliest Woman and she knew she had to take part as the prize was a really big sum of money. She wins the contest but it was hard for her as the mass media started writing unpleasant articles on her.

1920 is a life-changing year for Bevan. She was invited to work in the US and appeared in Coney Island’s Dreamland show—where a lot of people with unusual features show up to make people laugh. Bevan took part in the performances where she had to demonstrate her appearance by wearing certain clothing items that highlighted her unattractiveness and masculinity.

She became one of the most popular actresses in her group.

It was a cruel performance to allow people to ridicule you so that they can have a good laugh, but Bevan overcame it all for the sake of her children. She spent the remainder of her life as a freak show artist and in a circus before she died in 1933 at the age of 59. Apparently, people who suffer acromegaly don’t live very long.

Impressively turning her disease into her source of income, Bevan requested her children to bury her in England.

She is the real definition of never giving up in life.

Mississippi woman converted a Boeing 727 into a stunning lakeside home