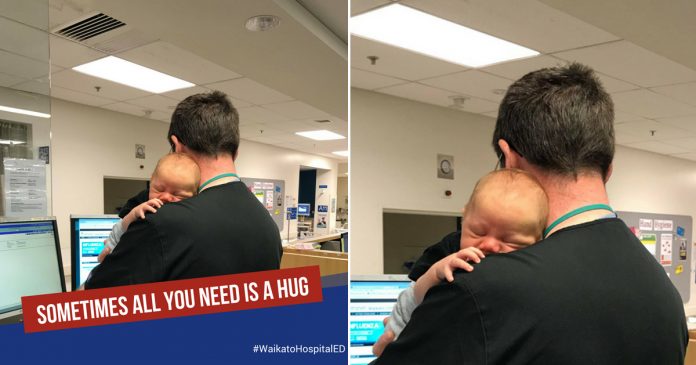 We are all very well aware that doctors have a lot of responsibilities and most certainly don’t have the time for things they’re not in charge of. However, this doctor at Waikato Hospital, New Zealand proves that he can definitely handle everything within his reach.

Just like any other day, a clinical nurse specialist Mike Haden-Jones was at that time roaming around the hospital when he saw the heartwarming event of a doctor carrying a sleeping baby. Haden-Jones decided to take a photo of the sweet moment and shared the picture on the hospital’s Facebook page.

The photo of the kind doctor holding a baby has since gone viral.

Haden-Jones explained that the baby actually belonged to one of the patients who came to the ER that day. It turned out that the baby actually wanted a nap but his unwell mother was unable to attend him as she was undergoing some tests. And most of us knew that it won’t end well when a baby didn’t get his nap.

Due to this situation, a few doctors in the emergency room tried to soothe the infant but he didn’t seem to cooperate. Then comes the emergency department consultant, Dr. Muir Wallace trying to hold the baby. Just right after, the fussy infant finally settled down in Dr. Wallace’s arms.

Besides happily carrying the sleepy little one, Dr. Wallace was actually on his duty to run the entire ER as well—and he did amazing.

After this beautiful moment was captured and shared online for us to appreciate, a lot of people were praising his awesome personality and the great job he was doing.

Having someone like this would definitely make our memories at the hospital a pleasant one.