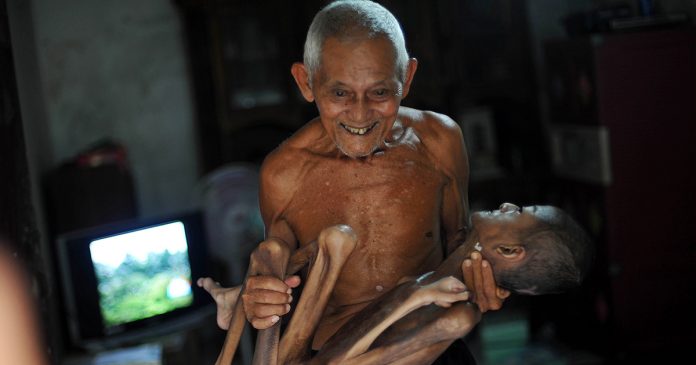 Syifa is a 17 year-old teenager from Pangadaran, Indonesia. Unlike other kids his age, he was bedridden and required someone’s constant care for his daily needs. He suffered from a strange illness since birth that made his skin grow thinner and thinner until he was literally only left with skin and bones.

His father died when he was only 5 months old. His mother decided to remarry and had followed her new husband, leaving Syifa an orphan.

His grandfather, Toton decided to take him into care and had been tirelessly caring for the teenager’s life.

Despite being bound by poverty, the 80-year-old military veteran was determined to provide for his sick grandson. However, he did not receive any service pension after his retirement and had no job that provided a steady income.

Toton managed with whatever he got from tending his garden and spent it on Syifa’s food and medication.

Even though Syifa could not speak or move, whenever he gets hungry, Toton would somehow sense it and reach to feed him. Toton was more a parent to Syifa than he was a grandfather.

He did everything from feeding him, to cleaning him up and even lifting him up to see the light outside occasionally.

According to Toton, Syifa’s suffering only motivated him further to look out for his grandson in whatever means possible. He was always patient with Syifa through all the ordeals, never once thinking of neglecting him. Toton’s undeterred service of love for his grandson caught the attention of rightful authorities all around.

Unfortunately, Syifa passed away while receiving treatment in the hospital due to the severity of his illness.

Toton wasn’t growing any younger by the day, and he had no one to take care of him. It didn’t matter to him because Syifa’s wellbeing was his only concern. All sincerely done in compassion and affection without expecting anything in return.