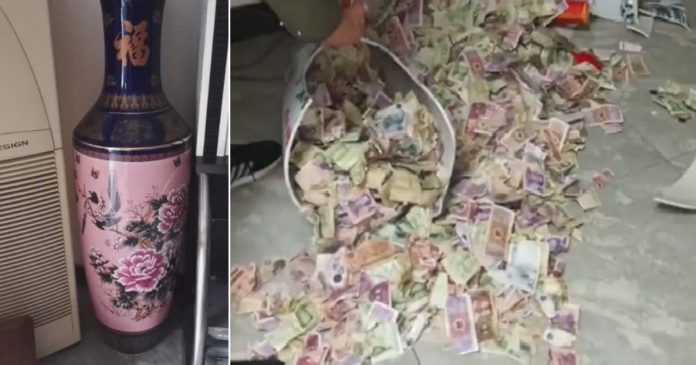 Even in marriages, sometimes there’s always something that we would want to keep as a secret from our other half and for this married couple in Guilin, Guangxi, China—a vase full of cash!

One day, the daughter of the Chinese couple was doing her morning stretch in the living room while her mother has just woken up in the bedroom.

While doing her morning exercise, the daughter accidentally broke a big vase in her house.

The vase was around this size located beside the television.

To her surprise, a stash of money burst out from the vase!

“I was sitting in my bed and suddenly, I heard a loud sound coming from the living room. I quickly jumped out of bed and ran outside. Then I saw the broken vase with a lot of money in it,” said the wife.

“I texted my husband and asked him to come back. His facial expression changed when he stepped into the house,” added the wife.

After seeing the money from the broken vase, her husband came clean and admitted that he has been using the vase to keep all his secret savings. He started his secret savings back in 2006 when they first bought the house—exactly 13 years ago.

“I saved this money from eating noodles. I don’t know what to feel now,” said the husband.

Looking forward to this 13 years of dedication, the wife didn’t get angry with her husband for having secret savings but spent the whole morning counting the money instead. Totaling up the money, the wife found it hilarious as her husband’s savings worth 13 years only sums up to 5000 Yuan (US$732.70).

Although it’s not a large sum of savings, it’s surely better than none at all!

A Teacher Punishes a Student which Led to Her Demise for...