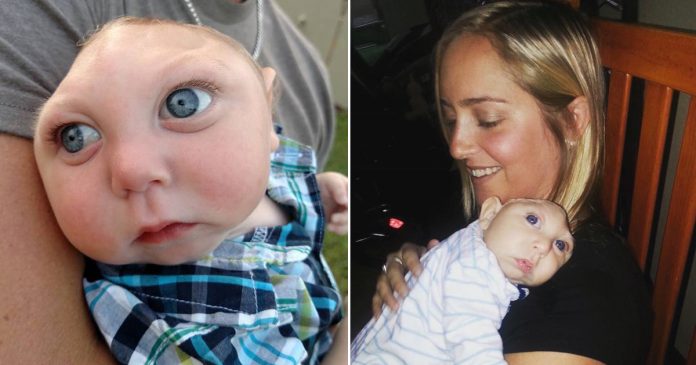 What would you do if you were told that your child has only hours to live? Would you give up trying or hold on to your faith for a miracle? Jaxon Buell’s parents certainly believed in the latter.

Jaxon was born with Microhydranencephaly (MHAC). It is a rare genetic disease that causes development abnormality in the brain. With the cause of this condition yet to be known, life expectancy for children born with MHAC is just hours, if not days.

Brittany and Brandon Buell were given only ONE option by the doctors—to have an abortion. They were religiously strong so they believed Jaxon deserved a chance to live, and thus decided to carry on with the pregnancy.

Jaxon was born with only 20% of his brain and skull. It was initially devastating for the couple but thanks to their optimism, Jaxon is soon to celebrate his third birthday. Miracles do happen if you believe in them!

The toddler is said to be making slow but great progress. He can call out to his ‘momma’ and ‘daddy’ and also expresses his ‘I love you’ to them. He is now learning how to grab things, his favorite being a green turtle that lights up when it’s pressed on. He loves it so much that he always has huge grins on his face while playing with it and gives it lots of hugs too.

Jaxon’s parents are still trying to figure out what caused his condition. Even then, Brittany and Brandon are extremely grateful they made the right choice. They highlighted that having Jaxon has been a blessing for them.

They have received the warmest support from the public, both financially and morally. Their GoFundMe target exceeded by over a hundred thousand dollars which eased their medical expenses.

Jaxon Buell defied odds with his strong will and his parent’s undying faith. A true miracle child.