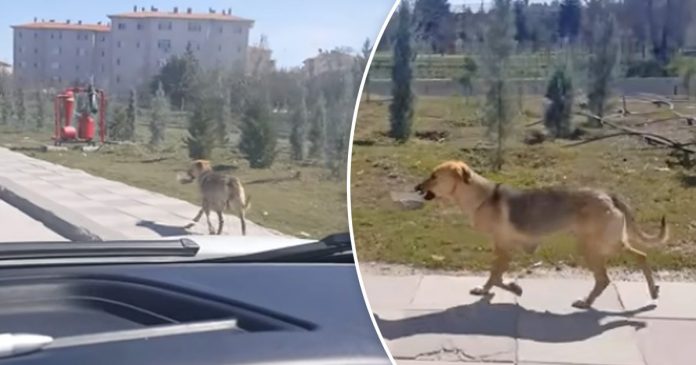 Nothing defines selflessness like a mother’s love. It is one of the few things left in the world that is just so pure and genuine. Animals, too, are selfless when it comes to showing love to their family in ways they know best. One of them is to provide them food and shelter.

Yusuf Kılıçsarı, an animal rescuer from Turkey recently documented this sight he stumbled upon in the streets. Yusuf has been actively rescuing abandoned strays as part of his profession. On his usual day out, he spotted a dog walking by the streets.

What caught his attention was the bowl of food she was carrying in her mouth.

The stray seemed to know where she was headed to as she was treading confidently in her route without hesitation. Intrigued by her action, Yusuf decided to follow her and record the entire journey.

As he tailed her with his car, she lead him towards a few streets down the road. She eventually reached a construction site and walked through it to a hidden junkyard, which Yusuf had to keep up on foot because it was secluded.

To his surprise, there were four healthy puppies wagging their tails upon seeing the dog with the bowl of food in its mouth. She was their mother evidently which walked all the way under the sun to make sure her babies are well fed.

The video further shows the puppies enjoying their meal while their mother lovingly watches over them from a close distance. She probably has not had any food herself, not even a gulp of water, but we know watching her pups definitely gave her so much satisfaction from the look on her face.

If this isn’t pure love, we don’t quite know what else is.

Viral 14-yo Cambodian teen who speaks 15 languages gets to study...