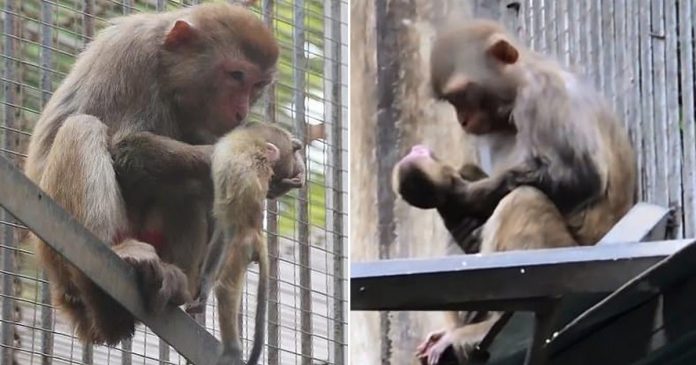 Mother and child relationship is such a beautiful bond, even in the animal kingdom. When the three-year-old monkey gave birth to her baby on May 4 at a Xiangyang Zoo in Hubei province, north-west China, she must be overjoyed to be a first-time mother.

However, the baby monkey was not born in good health and the mother refused to let any keepers approach it, as told by caretaker Liang Xinkuan.

Unfortunately, the baby monkey died due to a lack of nutrition two days later.

Realizing that her little one is no longer breathing, the grieving mother refused to leave the lifeless body of her baby and holding it tight in her arms.

Even more heart-wrenching, the mother was seen trying to wake her baby up to life by stroking its forehead and kissing its cheeks.

She refused to leave the dead baby monkey.

Since all of her efforts were to no avail, the mother monkey was seen resting her baby on the ground but stayed close to watch it over. She also looks into the distance with a sad expression, probably still unable to digest that death of her baby.

It’s hard for her to accept that her baby is now gone forever.

“Since then, the mother has been cradling her dead offspring and refusing to let go,” said manager Geng Jianqiao.

It was also reported that whenever the keepers tried to approach her, she would hold her baby even more tightly. Saddened by the incident, many people believed that the zoo should be responsible for the tragedy.

She holds her baby tighter when the keepers approached her.

“They should have taken better care of the pregnant monkey. The zoo has done a poor job in managing the incident,” commented one user after learning about the painful incident.

“How come the zoo didn’t take proper care of the baby monkey after it was born?” questioned another user.

Looking at this, the animal is indeed just as sensitive as us humans, if not more.

Rescued puppy missed her firefighter savior, overjoyed when he returned to...