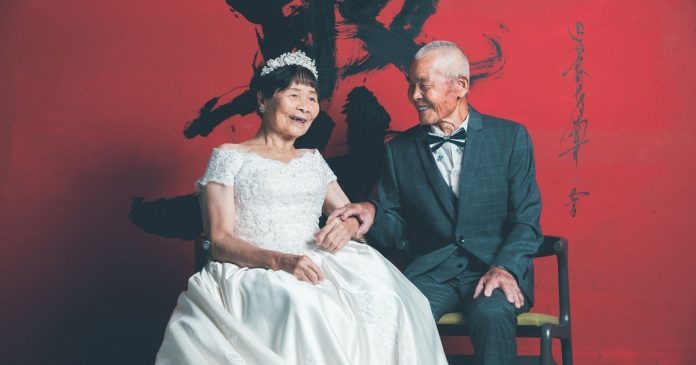 It has become commonplace to schedule a wedding photo shoot in conjunction with marriage ceremony. However, this couple didn’t get that opportunity until 60 years after their wedding.

83-year-old Ye Shang and 79-year-old Chen Zuli have been happily married for 60 years and reside in Chiayi, Taiwan. The one regret they both have is that they weren’t able to have a proper wedding photo shoot around the time they tied the knot.

They decided that now is as good a time as any to fulfill their wish and arrange a photo session commemorating their blissful lives together.

According to a news network, Ye Shang had one wish and that was to see his wife in a beautiful wedding gown and take loads of photos together. The couple’s marriage ceremony was plain and they did not have any photographs to look back on.

Ye Shang’s wish was granted and the old couple was taken to a studio and his wife was dolled up in preparation for the photo session.

Zuli was apprehensive at first and as much as the makeup artists and photographers gave her encouragement, she was still extremely shy about the whole affair. Her husband entered the fitting room and whispered to her, saying that she looked as beautiful as the first time he laid his eyes on her and that was all the boost she needed.

She finally put on the white wedding gown and stepped in front of the camera with her husband gleaming by her side.

When they got married 60 years ago, they had to scrape up everything they had in order to hold a simple ceremony which was attended by close friends and relatives. They then focused their energy on maintaining a stable household which meant striving hard to earn a living and raise their children.

Zuli’s health has declined in her old age and she now requires a wheelchair to get around but nonetheless, they had their photo shoot which was long overdue.

The Catholic Social Welfare Foundation of the Chinese Catholic Church helped the couple to arrange the photo session and even hired a professional makeup artist, stylist and photographer.

Needless to say that the whole affair went on without a hitch as the couple was absolutely smitten in front of the camera.

Military soldier was at Taco Bell when he took pity on...