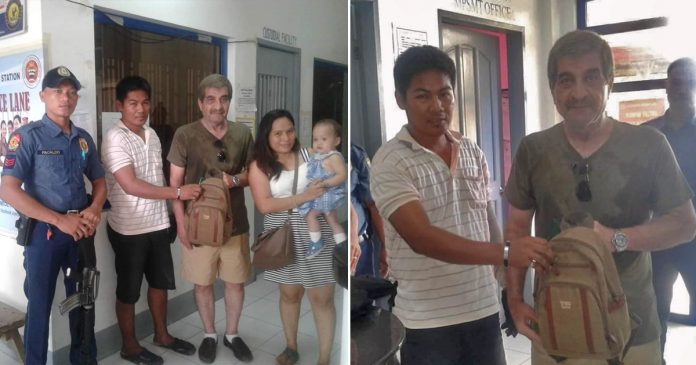 We’ve heard of the saying ‘honesty is the best policy’. It’s not just a mere saying because it indeed makes us a better person.

Dennis Geverola is a motorcab driver from the province of Southern Leyte, Philippines. On one of his daily rides, he found a bag left behind in his vehicle by an unfortunate passenger.

As he was browsing the bag in hopes of finding any details that would lead him to the owner, he spotted an overwhelming amount of cash instead. There was a lump sum of Php 2 million (estimated US$38,000) inside. Surprised, he kept looking but there were no traces of whom the bag belonged to.

He quickly brought the bag to the local authorities knowing they would have the means to locate the owner. Thanks to his honest deed, the owners were found shortly after.

Dennis was called to personally return the bag to the owners, as he is the one deserving all the praises.

Consequently, he went viral on social media and has been flooded with compliments since.

Sogod municipality mayor Imelda Tan took it upon herself to share the good samaritan’s act of integrity in her official Facebook page.

In a world that’s filled with so much violence and injustice, we need more people like Dennis Geverola. To have such a great virtue and to put it to practice without misusing it requires humility and a thorough understanding for humankind.

Often times, it is those who don’t have much in their life that seems to portray noble characteristics as such. It affirms the belief that less is indeed more.

We chance upon practices of honesty in our day to day life and it makes our heart swell with humility. Here is one such instance that we look up to every day.