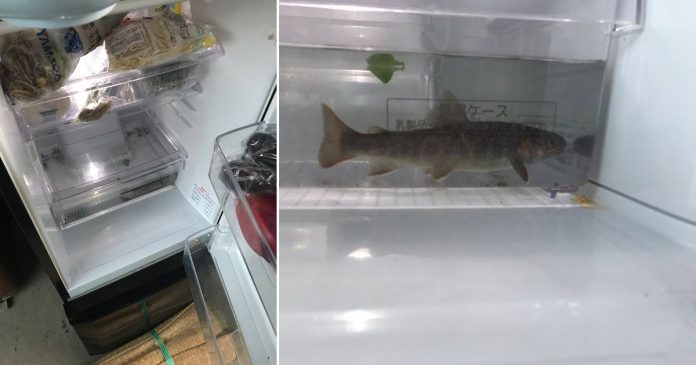 As children, we all know one or two unusual behaviors our parents have that is too weird to be shared to the public or to be proud of. While we usually cringe at the sight them acting bizarre, they seem to be completely fine with their antics.

Here is one recent example when a bewildered daughter took it to her Twitter to expose her dad’s ‘fishy’ business.

The father of Twitter user who goes by the nick @mebaruazi loves fishing. It’s his favorite thing to do: to spend time alone by the river, stretching his fishing rod out into the water waiting to get some fresh catch. He usually gets lucky as he never returns home without catching at least one fish. And when he does, the catch is cleaned and cooked for the family’s meal.

This time around, her father caught a fish as always. Quite a large one too. Perhaps he didn’t have enough resources to kill it right away, or just thought that it deserved to live a few more days for whatever reason.

So he came back home, opened the fridge and emptied the fruits and vegetables out of the drawer, filled it with enough water for the fish to sustain.

It was not until after a few days that the daughter opened the fridge and had the shock of her life. No, it didn’t go missing.

It was still in the fridge, except that it was swimming in the vegetable drawer, still very much alive!

She added that she wasn’t surprised the fish was still alive after all those days. Apparently, the fish is of a breed that survives in really cold temperature hence the fridge was a perfectly accommodating place.

Now that’s an altogether different situation of ‘fish out of water’.

If you can spot the error from this sequence in 10...