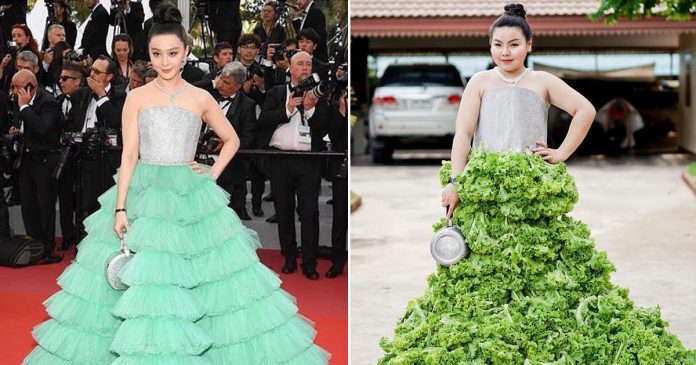 We have all seen and admired gorgeous outfits celebrities have worn but this young lady decided to recreate some of these high ends looks for a fraction of the cost and the internet is all for it!

Benjaphorn “Sine” Jessadakarnis, the young owner of an online plus-size clothing store. She started cosplaying in order to promote her whop but never imagined her pictures going viral. Her recreations received a lot of attention and her low-cost parody of actress Chompoo Araya’s red carpet look at the Cannes Film Festival sparked it all.

She parodied the actress’ dress using huge bags of prawn crackers that her mother sells and netizens loved it!

Sine recalled, “When I saw Chompoo’s dress, I immediately thought of my mom’s crackers.” That was how she came up with the idea for the series of low-cost cosplay.

Here is another one of her budget recreations where she used vegetables for the dress while holding a frying pan to complete the look.

Her photos had received so much attention that she was invited to several national television shows including Thailand’s Morning News which is a high-rating news show. She said in an interview, “I’m shocked. I never thought this many people would share my photos. And I’m on every news channel.”

Here’s a look she put together in order to imitate Rihanna’s bejeweled ensemble.

This is an excellent replica of one of the looks from Paris Fashion Week!

She used the spiky husk of the durian and taped it to her arms, simply genius!

This is pretty spot on. Sine used enoki mushrooms that resemble the feathers of Araya’s gown.

She brought back the prawn crackers for this look but with an added twist.

She even cosplays anime characters. Here she is recreating the look of a One Piece character and used buns for abs!

She even recreated Thor: Ragnarok’s entire movie poster and it’s nothing short of impressive.

A simple life can be a fulfilling life for legendary children’s...