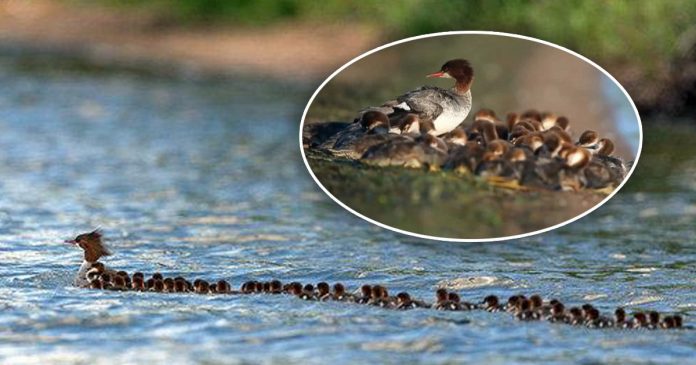 Brent Cizek is a wildlife photographer based in Bemidji, Northern Minnesota. He has a website that displays all his photography works and its pretty impressive, what he does.

Last winter, he made an investment that would later put him in the spotlight. He bought a small plastic boat in hopes of getting to use them to get closer shots of animals.

In June, he went to the largest lake of the state, Lake Bemidji to put his purchase to test. Brent recalled the strong wind mildly rocking his boat all around. Nevertheless, he decided to try his luck without expecting much.

As he was just treading along the shores of the lakes with his little boat, his eyes zoomed in on a cluster of birds waddling about in a large group.

As he steered his boat closer to them, he spotted what appeared to be a mother duck and her babies. They were closely trailing behind their mother in a neat straight line.

Brent knew he had to capture the moment. He began counting on the number of ducklings but lost sight of them a few times. He took a few photographs in between and waited until they finally got up to the shore.

There were not 1, not 2 but some 76 ducklings the mother duck was taking care of!

Right then, Brent realized how exclusive the shots are going to turn out. He posted his best shot online and without any doubt, it immediately garnered worldwide attention.

People were flabbergasted that one duck could birth that many ducklings at one time. It was later found that the ducklings might be of different families and the mother duck was only babysitting them.

According to Audubon, ducks often lay their eggs in the nests of other ducks. A female duck will have a nest of her own and also make her way over to another nest or two to drop off a few eggs.

So proud of you mama duck!

It has been 18 months but this Greek Hachiko refuses to...

Stray Mother Dog and Her Babies Enter a Stranger’s House to...