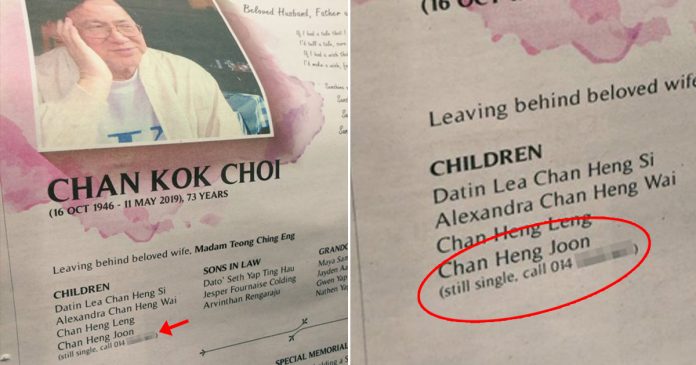 It is in some family’s tradition to honor the deceased with the things they had loved or associated with most when they were still alive. These Malaysian siblings decided to honor their late father by taking his great sense of humor to another level.

Chan Kok Choi was 71 when he passed away. He left behind a loving wife, four children and eight grandchildren.

His family members published a full-page obituary in a local newspaper to inform about his wake which was held the next day.

Along with the details of his family members, his siblings decided to help their single brother find a prospect by including his mobile number.

Chan Heng Joon is 32. He has 3 married elder sisters. In the obituary, all his siblings’ names followed their respective spouses’ and children’s. When it came to Heng Joon’s name, there it was, all by itself.

Heng Joon’s quest to find a wife is already made known among his family. In accordance with that, they added the little detail saying their father would have approved it.

Recalling his father’s colorful life, Heng Joon talked about his simple approach to life. His father always finds humor in everything and takes everything lightheartedly. His relatives too, remembered him for being kind and generous.

Heng Joon marveled at how his father had remained a ‘sunshine’ despite having many ailments and diseases. “He never once complained”, he added.

Chan Kok Choi’s family and relatives gathered at the Xiao En Centre for his memorial on Wednesday, May 13th. They shared fond memories of him and sang along to his favorite tunes. Heng Joon made the playlist in tribute of his dad, which he shared on Facebook.

This 12-year-old girl has a higher IQ score than Albert Einstein...