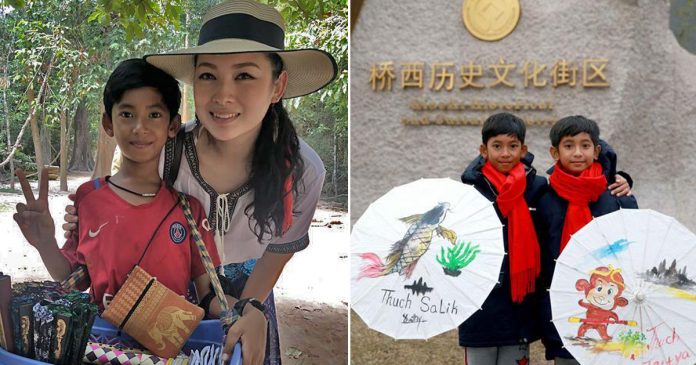 Six months ago, a young Cambodian boy stunned the world with his multilingual ability. Remember Thuch Salik? He made a living selling souvenirs to tourists at Angkor Wat. He became viral when a 3-minute video of him speaking in fifteen languages was shared online by an impressed tourist.

When Cambodian businessman, Kit Chhern first noticed the young prodigy’s talent on social media, he wanted to help him realize his dreams.

During an interview, Salik shared of his aspiration to study language in China. Kit posted the update on his Facebook about sponsoring his studies abroad and left a touching message for Salik.

“You are 14 years old and will be leaving your home to a foreign country. I hope you can work hard to be a successful and kind-hearted person. Good luck, Salik.”

Salik departed to China with goodbyes and lots of love from his family and Kit himself.

Before leaving, he expressed his utmost gratitude to the businessman for this once-in-a-lifetime opportunity.

He was given a warm welcome by the students and staff members of the school upon his arrival. He was presented with a bouquet of flowers and even a short dance performance.

Salik is most fascinated with the Chinese language and culture among all the other languages he picked up. He will be attending Hailiang Foreign Language School in Zhejiang province, according to sohu.com.

He aspires to further his studies in Beijing and become a passionate tour guide who not only shows tourists places, but also educates them on the heritage and culture of his motherland, Cambodia.

This young boy realized the length to which hardwork and perseverance will take him. If it wasn’t for his effort and interest to pick up different languages from tourists, he wouldn’t be where he is now.

Watch the 3-minute viral video of Salik if you haven’t seen it yet: