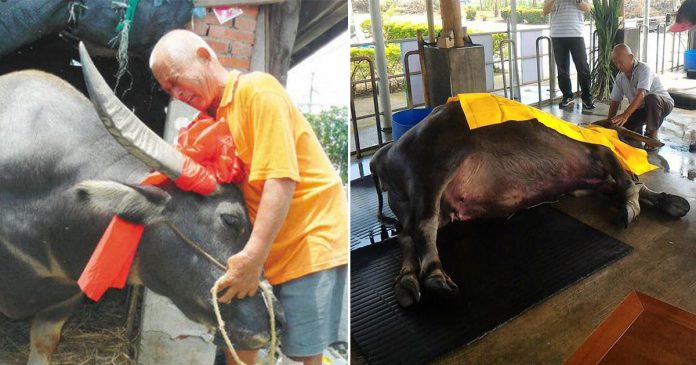 Human and animal deep relationship is indeed fascinating. An elderly man named Liang Ping from Yunlin County, Taiwan owns a buffalo that he regards as a part of his own family and has been raising it for 26 years.

Named as Niu Niu, the buffalo has been working together with Ping almost every single day in the field and developed a deep relationship with each other. As Ping turned 75 years old in 2011, Niu Niu is getting older too and about to retire. Ping cleaned the buffalo after they worked at the field for the last time and wanted to send it to Old Cows House in Tainan.

They worked together in the field almost every single day.

Understands that it will be separated from its master, Niu Niu refused to get on the truck and didn’t want to move. So Ping patted its face and said ‘It’s not that I don’t want you’. After hearing those words, Niu Niu finally willing to get on the truck.

After being together for such a long time, both of them seemed to be in tears as they separated.

At the Old Cows House, Niu Niu refused to drink or eat because it missed Ping. Hearing the news, Ping immediately went straight to the place to see his buffalo. As soon as Niu Niu met Ping, its appetite became better. Niu Niu spent 6 years at the Old Cows House and turned 32-year-old in 2016. That is equivalent to 100 years old of human age.

The Old Cows House where Niu Niu is placed.

Niu Niu gained its appetite after visited by Ping.

One day, the keeper found Niu Niu in a very weak condition and it could not swallow its food. The keeper quickly informed Ping about it and he immediately brought some food for Niu Niu from his hometown. Niu Niu happily ate the food from Ping when he arrived. That night, Niu Niu died in his sleep due to multiple organ failure and the meal Ping prepared for it had become its last supper.

Learning about the unfortunate incident, Ping rushed to the Old Cows House and saw the buffalo on the ground covered in a yellow shroud.

“You’ve worked hard all your life. Find a good and rich family to reincarnate and have a good life!” said Ping to Niu Niu for the last time.

Such a beautiful relationship. We can tell that the animal definitely waited for its owner before taking its last breath.

The Owner of a Cat is Surprised by Its “Professional” Way...

Loyal dog waits at the same spot for 10 years in...