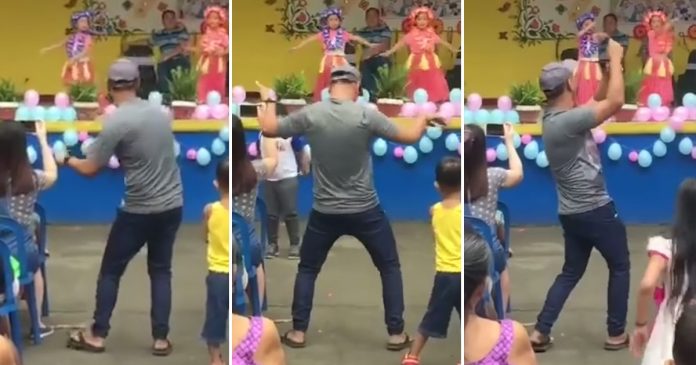 The best gift any parents could give their children is support. The world can be very daunting for kids, and while they are learning to embrace everything life has to offer them, the pressure can be quite omnipresent. Here’s what a supportive father did for his 6 year old daughter to show her no matter what, daddy’s there for her.

Rjay Tolentino is a father of four from Pasig City, Philippines. On March 9th, he accompanied his daughter Lyra Jaz to the Festival of Talent for her kindergarten dance performance. When it came to Lyra’s turn to dance hula with her partner, her father sensed that maybe his little princess needed some help getting it started.

So he stood in front of her in the audience crowd, and began belting some moves to his daughter’s dance routine!

Lyra now had her full focus on her dad and begins to let loose and dance along to her dad’s steps. The crowd started cheering, and while we are certain it was mostly for Rjay’s top class performance, Lyra managed to complete her Polynesian dance with an applause and a smile on her face.

His grooving hips and wiggling arms took the internet by storm as the entire act was filmed and uploaded on YouTube.  ”I knew my girl had stage nerves, so I just tried to do everything I could to make her feel better”, said the doting father. Watching him, his daughter too will now learn that if you’re confident enough and are fully involved in what you do, you’re already a winner.

Parents out there have some serious note to take from this adorable father-daughter duo.

A Loyal Dog Accompanied His Owner who Fought Cancer for 9...