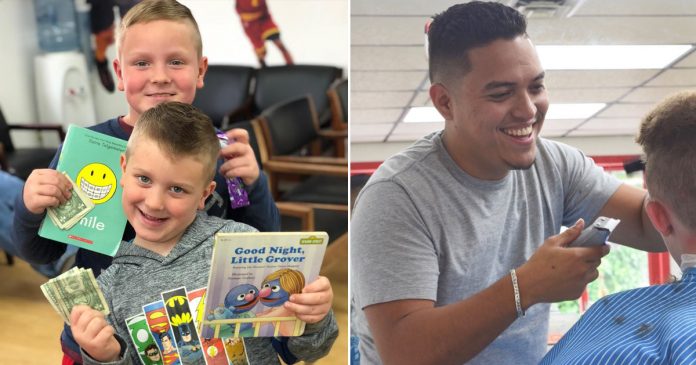 George R.R. Martin once said, “A reader lives a thousand lives before he dies . . . The man who never reads lives only one.” Jon Escueta, founder and owner of City Cuts barbershop in Kutztown, Pennsylvania is bringing these golden words to life with his “Books by Kids” program.

Every kid that walks into the shop gets paid $3 for reading a book of their choice out loud during their haircut session. Entertainment and education, in one go.

It’s started off with a mere $50 fund by Jon himself, and later on the movement is picked up when a video one of his young customers enunciating lines from a book was uploaded on his Facebook page.

When asked about his motivation behind this initiative, he said that it sprouted from his personal childhood experience.

Jon was a timid 8-year-old when he migrated to the US from the Philippines. He didn’t know English and felt a lot of pressure being judged for it. Though it was difficult, he credits his uncle and aunt for guiding him through his teenage years.

He wants shy kids to build up their self-esteem and feel empowered through reading.

If they can read out loud to their barber, who’s potentially a stranger, then they can speak confidently anywhere without feeling like all eyes are on them, he says.

Thanks to a 7th-grade teacher who encouraged him to read to develop his confidence, he decided to use the same method to inculcate his young customers.

“I told my reading teacher I didn’t like it [reading]. I liked basketball”, said Jon. Instead of shutting him down, his teacher used a book about basketball to get Jon interested in reading.

The parents of his customers are eternally grateful to him because they could see great progress in their children. Jon, too, had conquered his fear for public speaking as he was interviewed countless times for his program.