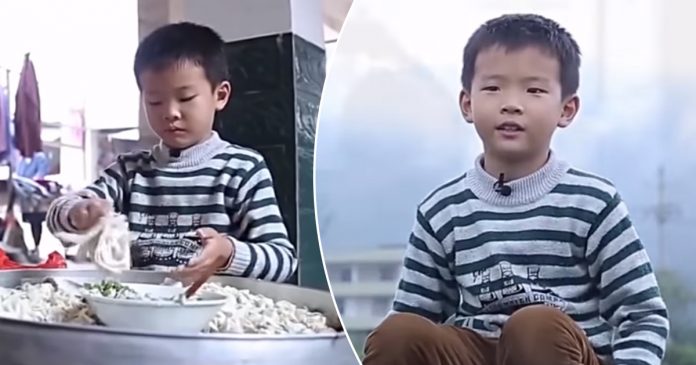 Liu Minghui is only 8 years old but he can make 10,000 wontons per day with his mighty little hands. He started helping his grandparents out in their shop when he was six and over these 2 years, he has only gotten better at his wonton-wrapping skill.

Liu’s grandparents sell snacks and small-eats at the rural fair trade in their hometown every month. They sell almost 400 bowls of wonton everyday and each bowl comes with a generous helping of 30 wontons. When asked of how Liu had developed the speed and skills, Liu’s grandpa explained that the boy and his little sister had lived with them since they were born.

“They were both sensible kids, and had good academic performance too”, added grandpa. We never really had trouble raising them or telling them what to do. They just followed us one day and picked up an interest in learning the trade on their own.

Grandpa was stuffing the wonton with some pork and beef paste while Liu was watching him closely throughout the process.

That’s how it all began. Liu offered to lend a hand and grandpa asked him to help put the stuffing into the wonton wraps. He later wanted to know how to make it from scratch on his own. Grandpa, without hesitation, taught him the tricks and techniques on perfecting the wonton morsels.

“I saw a genuine curiosity in him”, his grandfather mentioned. I knew he was going to pick it up fast and surely, he did. “Look at him now, he’s a better chef than I am”, giggles Liu’s grandfather.

Once his hands start working, it just continues moving with such speed and machine-like precision that it’s hard to catch a proper glimpse at it.

Liu said that he hopes to earn more money by selling more wontons so that he can support his family and buy clothes for his younger sister.

This is the reason why jeans have tiny rivets on the...

9-yo boy saves mom’s life with his timely act when she...