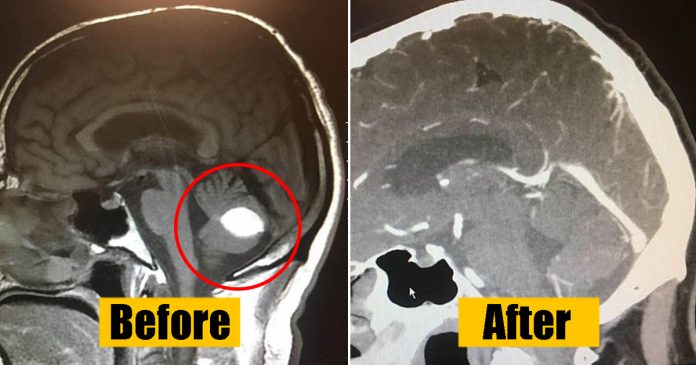 A man suffering from a malignant brain tumor that left him unable to walk unassisted has miraculously recovered without the help of doctors.

Paul Wood from Lodi, California fell seriously ill a few months ago and all the doctors he visited gave him different diagnoses. He said he suffered from massive headaches and could not manage to walk down a hallway without having to hold on to the walls.

He believes his faith had ultimately helped him get rid of his tumor as there’s no logical explanation for how it happened.

Paul was told by a neurosurgeon at UC San Francisco that he may have a brain bleed and several radiologists believed he had a tumor in his brain. He was put on schedule for an operation but on the day before, it was canceled.

His X-ray results had come back completely clear of the tumor and medical experts cannot explain how the tumor seemed to have vanished on its own. Paul had made a full recovery and it was as if the tumor never existed.

Dr Richard Yee said of the incident “We do tests and we have medical technology and we try to come up with some conclusion… sometimes things happen that we can’t explain.”

Paul believes that he had divine power on his side.

He told his community about his baffling recovery and received hundreds of well wishes from all around. He recalled, “My phone is blowing up, my Facebook is prayer after prayer, all over California. It’s a miracle and that is the way God planned it.”

His pastor also agreed that it was God’s hand working to rid Paul of his tumor.

Pastor Jason McEachron from Gravity Church said, “He [Paul] just kept saying, ‘no matter what happens to me, I’m going to be okay. I trust God.” His faith in God coupled with his positive thinking had resulted in a medical miracle.

The whole incident was so baffling that doctors hope Paul would agree to volunteer as part of a study they wish to conduct.