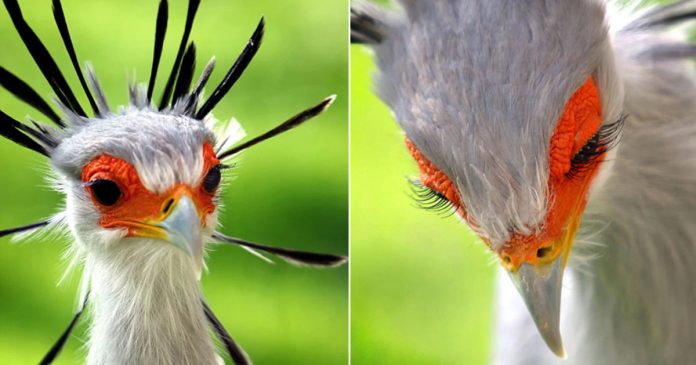 Many of us are aware that beautiful birds exist in this world, but none might be able to beat this one. Sagittarius Serpentarius or easily known as the secretary bird is a large raptor related to hawks and eagles.

Being related to eagles, this bird can’t help to intimidate you, not for its predatory nature but for its alluring beauty and elegant looks instead!

Secretary bird got its name for the quill-like crests on the back of its head that resemble the 18th-century clerks with pens tucked into their wigs.

These birds can be measured around 4.5 feet in height, 7.3 pounds in weight, and have a wingspan of over 6.5 feet. It has a hooked beak and a relatively small head with light-bluish grey plumage. Its flight feathers are black and they have black feathers on their thighs and on the back of their heads as well.

Besides that, it also has long and powerful legs.

Another distinctive feature that might get you envious, its long prominent lashes to die for. Thanks to its unique appearance, it has attracted a nature photographer of 10 years, Brian Connolly to capture her in his lens.

Lashes game so strong, it puts mascara to shame.

Look at that beauty.

“From what I’ve seen, the secretary bird is truly unique. They hunt snakes on the ground by stomping them with their dinosaur-looking legs and talons,” told Connoly to Bored Panda.

Unlike other birds of prey, the secretary bird is largely terrestrial and hunts its prey on foot.

This diurnal carnivorous raptor feeds on a variety of prey including the snakes on the African grasslands. It might also travel over 18 miles a day to search for prey like snakes, insects, lizards, amphibians, rodents, and bird eggs.

This bird also stamps on the ground with its big stout-toed feet to flush prey out of hiding.

It’s definitely one of the prettiest birds out there!