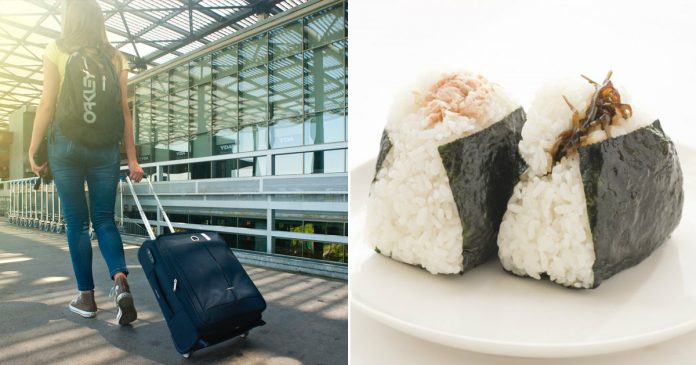 Due to factors like safety and health, each country has its own rules and regulations—and Taiwan is no exception.

Recently, a tourist called Tan (not his real name) who’s clearly uninformed about a new rule was fined for NT$30,000 (around US$956) when he accidentally brought two pieces of onigiri containing chicken meat into Taiwan.

For those who are not aware, Taiwan has currently tightened their rules and regulations regarding their banned items and that includes snacks or food containing meat such as chicken, lamb, beef and pork.

The rules have been tightened to prevent an outbreak of Foot and Mouth Disease and African Swine Fever. Not only that, the ban includes fresh fruits and vegetables too.

Tan who was at that time traveling to Kaohsiung with his three other friends bought two chicken onigiri and two fish onigiri to be eaten on the plane before boarding. Totally forgot about the snack they beforehand, Tan and his friends proceeded to the ‘Nothing to Declare’ lane at customs when they arrived at the airport.

However, Tan was suddenly stopped and his bag was taken for inspection by the customs officers. The officers found the onigiri inside and told him how strictly forbidden meat products were to be brought into the country.

Just like that, Tan has to pay for a US$956 fine because he’s violating the Statute for Prevention and Control of Infectious Animal Diseases.

Luckily he didn’t bring any products containing pork as he was informed that the fine would be heavier if that’s the case—which going to cost him around $31,875.

The other two fish onigiri, fortunately, were not banned.

The custom officers told them that there were multiple warnings posted around the airport to notify the tourists. As the leaflet that they received upon passing the immigration only mentioned pork products, Tan and his friends didn’t realize about the new addition to the rule until it was too late. Furthermore, they also forgot that they have bought the onigiri.

Let’s all learn from Tan’s mistakes and never forget to check on the new rules and your own bag when traveling to new places.

Make sure your family and friends are aware of this new rule by sharing this with them!

Fishermen cut open the bellies of dead pregnant sharks. What they...