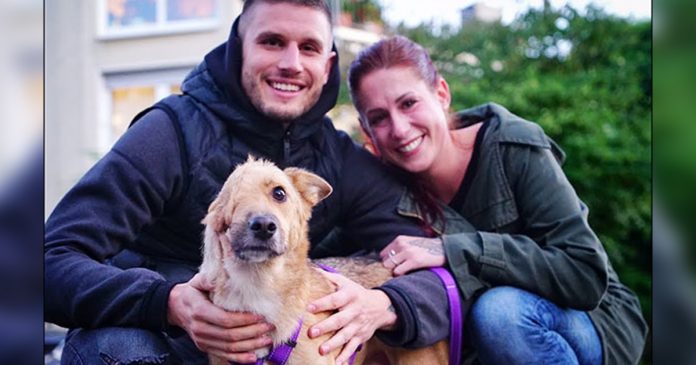 For a dog named Sky, the sky was the limit for his survival. After escaping a brutal near-death abuse from his previous owner, Sky was found and put up for adoption. The kind stranger who first encountered Sky recalled how bad his injuries were.

The right half of his face was severely damaged. He was missing an eye and ear, his empty eye socket was instead filled with dirt and grass and dead tissues were falling off his face. His jaw was badly broken and dislocated due to taking hits from a shovel.

The adoption center only put up pictures of Sky’s left face. A family from Germany saw him on the website and had him shipped to them. Only when they actually received Sky that they realized how serious were Sky’s injuries.

Thankfully, they decided to keep him and brought him to several veterinarians for treatment. The damage was irreparable and they were only provided with one option; to put him to sleep.

Then they found Viktor Larkhill, founder of an animal adoption and rescue movement in Spain. Despite enduring excruciating infections from the time of the damage, Sky was still holding on to his life.

Perhaps it was his strong will that chanced him with Viktor.

A thorough, detailed examination by Viktor’s team was conducted. They decided that Sky’s jaw needs to be replaced with a prosthesis. This would enable him to eat and drink because he was severely malnourished due to lack of food.

The surgery was successfully performed on Sky and it was the first ever of its kind to be performed on an animal. Sky finally recovered and joined his loving family and his buddy. His family had missed him so much that they couldn’t stop showering him with smooches and snuggles when they were reunited.

Sky may have had a terrible past, but he had a determination to live and live he did.