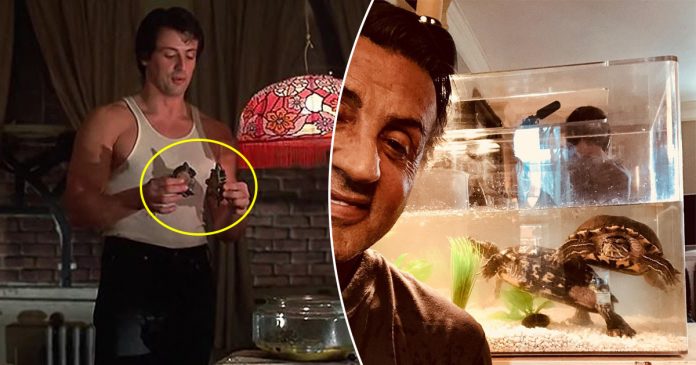 In the classical movie, a pair of turtles—Cuff and Link—was featured when Rocky purchased the reptiles while courting Adrian at the pet store where she worked. Surprisingly, Rocky’s pets Cuff and Link are still alive even after more than 40 years later!

One ecologist on Reddit explained that Cuff and Link are the so-called red-eared sliders (Trachemys scripta elegans) and usually live up to around 50 years old if they’re well taken care of. Now at 44 years old, the turtles are still doing very well for their species.

“With my original buddies from the first Rocky, Cuff and Link!”

Last year, Stallone reunited with his on-screen pets and posted his selfie with the same pair of turtles that appeared in the first Rocky movie on his Instagram. The selfie was captured on the set of Creed II—the fifth film to feature Cuff and Link. The turtles have also made their appearances in Rocky II, Rocky Balboa, and Creed as well.

In the first movie, Rocky bought the turtles at Adrian’s pet store.

After the film was wrapped up in 1975, the turtles were returned to the ‘real-life’ pet store owner whom Cuff and Link were bought. Apparently, the pet owner Joseph Marks still kept the turtles after all these years.

The turtles are female and were five years old at the time they’re shooting Rocky.

One fall, Stallone was scouting locations for Rocky Balboa and Joseph Marks saw him. Marks decided to say hello to Stallone and he got a call two weeks later.

It turned out that the movie creators found out that Cuff and Link were still alive, so they decided to feature them in the film.

Thanks to Stallone and Marks who kept in touch, Cuff and Link had their cameos in all of the follow-up Rocky movies.

Watch Cuff and Link in the movie: