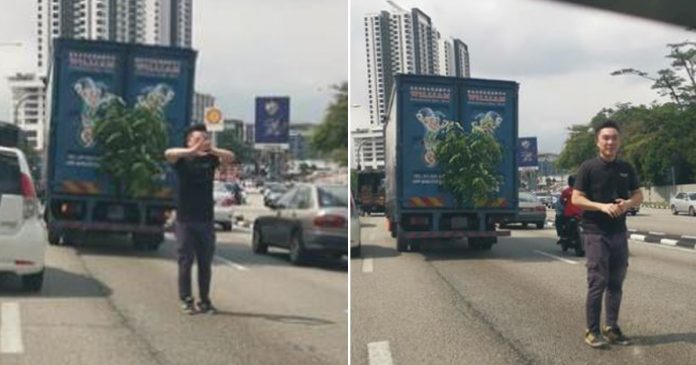 What’s a better combination than peanut butter and jelly? Roads and traffic jams of course! It’s the one thing that irks drivers and non-drivers alike because what you thought could be a five-minute back up might eventually turn into an hour of waiting amidst lanes after lanes of vehicles.

The worst case scenario is when you’re just about to run out of patience, a vehicle abruptly stops in front of you and now you’re stuck for good.

A similar incident happened on March 16th when a lorry belonging to an event exhibition company caused heavy traffic in the midst of peak hour. However, what happened next will take you by surprise.

The lorry driver, instead of sitting behind the wheels got down from the vehicle and bowed to everyone on the road as a sign of apology.

The young man understood that the unfortunate incident was causing inconvenience to everyone. While waiting for help to arrive, he thought the least he could do is be courteous. The young man’s manners was heartwarming to watch as few passerbys took pictures of his kind gesture and posted it online.

Not only did he apologized, he even directed the vehicles stuck in the middle lane to their left and right.

Comments flooded in reminding people to be thoughtful and ethical on the road. The young driver received many praises for his consideration towards the safety of others.

It appeared that ladies were particularly interested in further getting in touch with him. No one could resist a good-looking gentleman with manners, right? Apparently, he was already taken. Better luck next time ladies.

It’s not everyday we come across a traffic incident with ending that favored everyone. This one did and we all could certainly take one or two lessons from it.

Photographer has couple each write 1 word describing their marriage. She...