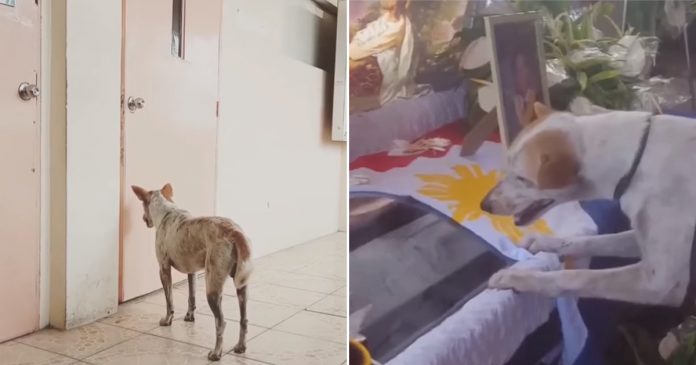 If you’re fond of animals, dogs, in particular, you must have known the story of Hachiko. Hachiko was a real dog who became famous worldwide for its love and loyalty to its owner. Nicknamed Hachi, the Japanese Akita dog was the beloved pet of an agricultural science lecturer named Hidesaburō Ueno.

He died at the train station and was built a statue at the very place of incident to commemorate his remarkable loyalty.

Here is another such story of a dog that remained loyal despite his owner’s passing.

Buboy is a stray dog in Mabalacat City College, Pampanga. Professor Carmelito Marcelo, who worked there adopted him and took good care of him for 3 years. When Carmelito passed away on Saturday due to heart attack, Buboy refused to accept the fact.

He perceived his ‘owner’ to still be alive and waited by the usual door for his appearance.

The scene broke the heart of many, especially the professor’s students because they knew how much he loved Buboy as his own child. He didn’t have a family so both the man and the dog only had each other for company.

On the following Tuesday, Buboy was brought to his owner’s wake. The good boy just stood perched by Carmelito’s coffin and was looking at his framed picture for an extended minute or so.

Then, he just got down and sat himself next to the coffin, not wanting to leave his beloved owner. We hope Buboy gets taken good care of despite his owner not being around anymore. His loyalty deserves that and more.