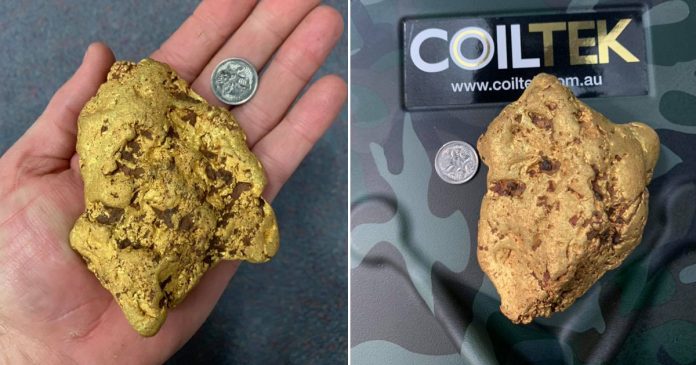 A gold hunter had hit jackpot recently when he discovered a massive 49oz gold nugget on his seasonal hunt in the Goldfields region of Kalgoorlie, Western Australia. It is estimated that the shimmering find is worth $69,000!

Kalgoorlie is the top spot for Australian gold mines. Roughly 75% of all the gold mined in the land down under comes from in and around the region. The anonymous gold prospector is an experienced hobbyist who frequents the said place to hunt for the precious metal.

The man was walking around the salt bush flats with his metal detector when suddenly the gadget started beeping. A few diggings ensued and then, there it was, the chunky nugget lying in the dirt.

He brought the hefty find to Finders Keepers Gold Prospecting, a gold trade establishment. The owner, Matt Cook said that the man “walked into my shop and showed me the nugget in his hand with a big smile on his face.”

Additionally, Matt delights that it has been a busy year thus far, and he has never seen quite a year like it. “It’s like a gold rush”, he adds.

He added that it’s good to see such finds because they are harder to attain these days. Apparently, a gold nugget of that size was found only a few times a year and it involved the use of more heavy machinery, not metal detectors. It was certainly his lucky day.

Since the price of gold is high at the moment, more and more Australians are venturing into gold hunting. Some do it as a weekend hobby, while others are full-time prospectors. The more common size of gold to be found in Kalgoorlie is of small traces, about half an ounce on average.