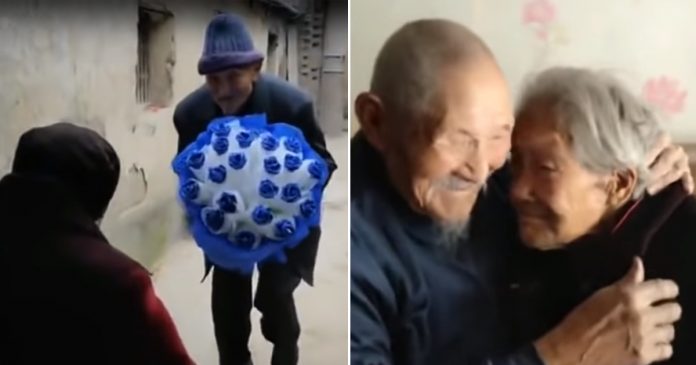 Do you know what’s better than true love? A true love that remains strong beyond the passing of years. Often times, elderly couples seem to be so in love with each other than the younger ones, probably because they have spent more than half of their lives with their partner and have seen it all together.

Similarly, this adorable elderly couple in China decided to extend their Valentine’s Day celebration long after it’s over.

Though the official Valentine’s Day approved worldwide is February 14, China has its own day to celebrate love. It’s May 20th. In Mandarin, the numerical of the date, ‘5/20’ has an identical pronunciation to the phrase ‘Wo Ai Ni’, which means ‘I Love You’ in the language.

In a video that has now has thousands of views online, a 97 years-old husband is seen to impress his long-time love, his 99 years-old wife by handing her a bouquet of flowers. The grandpa is holding a large bouquet of blue roses, hands all shaky approaching the love of his life. The bouquet even matches his blue beanie. How cute!

The wife took the bouquet, held her husband’s hand and they both started walking together. The video also shows the couple sharing a meal, with the wife lovingly feeding her husband.

The grandpa then proceeds to gift a pendant chain to her and even put it on her neck himself.

By the end of the video, they were seen hugging and caressing each other, just enjoying each other’s company. Their granddaughter shared in a news portal that they have always been by each other’s side expressing love in whatever ways they could.

This elderly couple proves to us that it does not take much to be in love and to celebrate love. Watch the video below to witness their adorable antics: